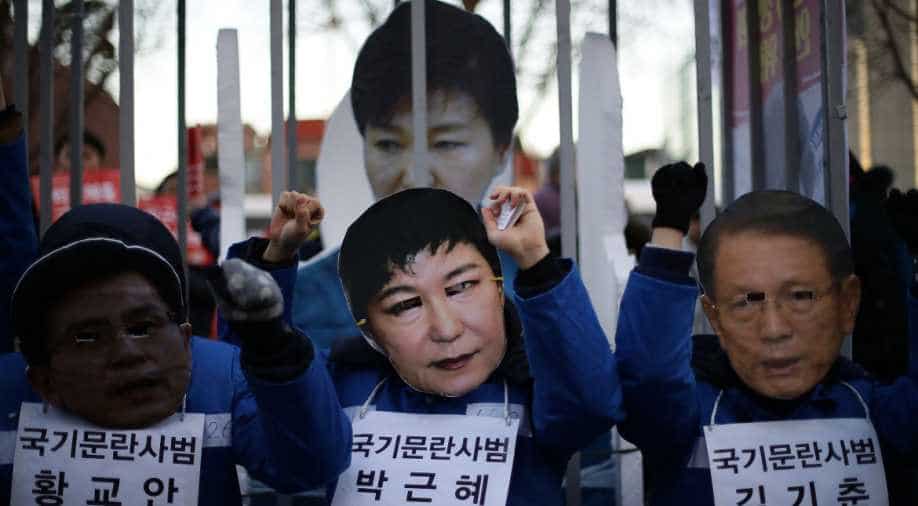 South Korea's impeached President Park Geun-hye on Sunday broke a month-long silence over her alleged role in a corruption scandal, publicly denying charges of wrongdoing and saying that the accusations against her were "fabrication and falsehood".

Park also said that she was set up over allegations that she ordered the government to support a 2015 merger of two affiliates of South Korean conglomerate Samsung, a deal which has become central to the investigation.

"It's completely framed," she was quoted by local media as saying, without elaborating. Park is being investigated over accusations that she gave favours to big businesses in return for financial contributions to entities controlled by her friend, Choi Soon-sil.

On Sunday, Park denied Choi was allowed to wield undue and wide-reaching influence over state affairs.

In a hastily arranged briefing over tea, the leader met reporters from domestic media in her first event since being impeached by parliament on December 9. Park's fate is in the hands of Constitutional Court judges who have up to 180 days to uphold the impeachment or reinstate her.

She last appeared in public on November 29, offering to step down if parliament could agree on a way for her to leave office. Opposition parties rejected that offer and led a motion to impeach Park by a wide margin, joined by some members of her own Saenuri Party. The Constitutional Court is set to begin hearing arguments from both sides.

Park said on Sunday that the decision by the country's national pension fund to back a merger between two Samsung Group affiliates was "a just policy decision" made for national interest, and that the deal was supported by many brokerage firms at the time.

"I did not have an iota of thinking to help anyone and the thought never crossed my mind," Park said. "This is not the place to tell you all the details, but what I can clearly say now is that I did nothing whatsoever to favour anyone or collude with anyone to do that."

The merger in 2015 of Samsung Group affiliates Cheil Industries Inc and Samsung C&T Corp has become a key part of the probe into influence peddling at the pinnacle of South Korean politics. The deal has been criticised by some investors for strengthening the founding family's control of Samsung Group, South Korea's largest "chaebol", or conglomerate, at the expense of other shareholders.

The National Pension Service, which had 545 trillion won ($451.78 billion) under management at the end of September and was a major shareholder in the two Samsung affiliates, voted in favour of the merger without calling in an external committee that sometimes advises it on difficult votes.

Park, 64, is accused of colluding with Choi to pressure big businesses including Samsung to make contributions to non-profit foundations backing presidential initiatives. Hundreds of thousands of people have turned out in central Seoul for ten straight weekends to demand Park's immediate ouster, but she has defied the call and indicated through her lawyers that she will fight impeachment in court.

Park's comments on Sunday were more detailed than previous ones, and also touched on allegations of negligence over the handling of the Sewol ferry disaster in April 2014 that killed more than 300 passengers, mostly school children. Park was criticised for mishandling the rescue efforts and questions have persisted about her whereabouts during the seven hours between the first report of the accident and her appearance in the government's emergency room.

Park said she had remained in the residential quarters of the official Blue House residence on April 16 because no official event had been scheduled, but received reports about rescue operations before moving to the nearby situation room when the magnitude of the disaster became evident.

She denied allegations that she failed to pay closer attention to the rescue because she was receiving a cosmetic procedure at the time. "That is not possible even by common sense."