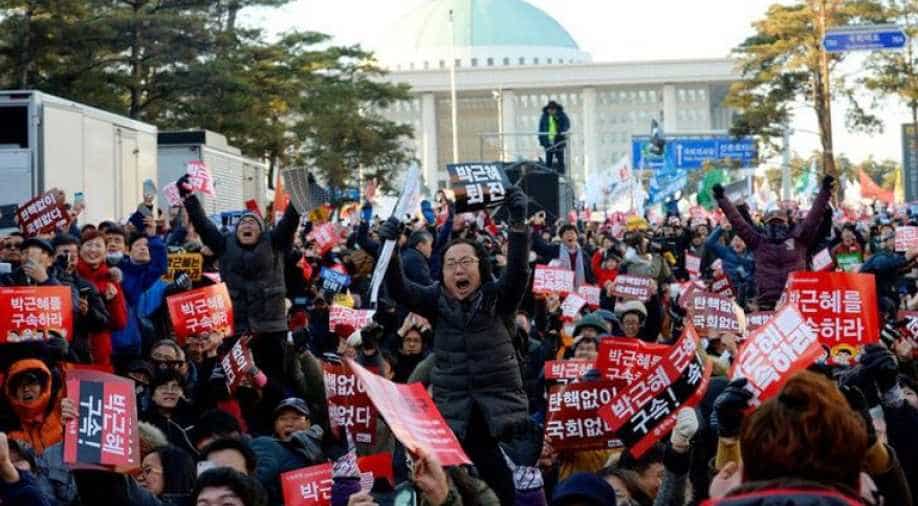 Protesters took selfies before a large banner reading, "Congratulations on the impeachment of Park Geun-hye; Now let's lock her up." Photograph:( Reuters )

Jubilant South Koreans celebrated with cheers, hugs and selfies on Friday, after lawmakers voted to impeach embattled President Park Geun-hye over an influence-pedalling scandal that had drawn huge crowds to weekly protests demanding she step down.

The impeachment motion, passed by 234 lawmakers with 56 opposed, suspends Park's powers and leaves the Constitutional Court to decide whether to uphold the motion and remove Park from office or reject it and reinstate her.

A large crowd of demonstrators gathered outside parliament in anticipation of the outcome greeted the news with cheers.

"I feel great!" said 54-year-old rice farmer Im Chae-jum. "I thought it was going to pass but, either way, whatever happens in parliament, we'll take Park Geun-hye down with people power. The people won!"

Park's approval rating stood at just five per cent in a poll released earlier on Friday.

Protesters waved banners and flags as they climbed on a tractor that some farmers had used to block a road outside parliament.

Others took selfies before a large banner reading, "Congratulations on the impeachment of Park Geun-hye; Now let's lock her up".

Several people blew horns or held up signs that read, "Victory for the people!"

Choi Ji-young, the mother of a child who died in the 2014 Sewol ferry tragedy, watched the vote from a gallery in the assembly. She was among a group of victims' relatives, who danced and chanted as they left the building.

"I screamed 'Hooray!'" said Choi. "This'll be a chance to get to the bottom of the disaster and hold Park and her close aides accountable."

The events around the ferry sinking, which killed more than 300 people, mostly schoolchildren, have loomed over Park's presidency.

Protesters have staged massive demonstrations in central Seoul every Saturday for the last six weeks of the political crisis that rocked Park's presidency.

The protests have remained festive and peaceful, centred on large, candle-lit rallies that have drawn up to a million people, by some estimates. Another was planned for Saturday.

Park, 64, is accused of colluding with a friend and a former aide, both of whom have been indicted by prosecutors, to pressure big businesses to donate to two foundations set up to back her policy initiatives.

"Now I feel good," said Choi, holding a red rose wrapped in a yellow ribbon, a symbol of the protests against Park. "She should go to jail."