South Korean, US missile defence talks continue, but not at Asian forum 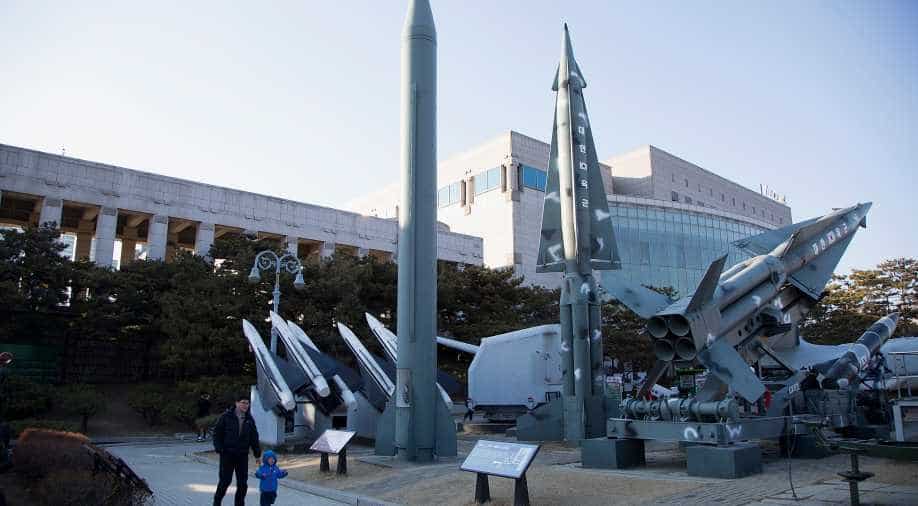 People walk past a display of model missiles including a North Korean Scud-B (C) at the War Memorial of Korea. North Korea launched a long-range rocket carrying a satellite on February 7, 2016. Photograph:( Getty )

The deployment of an advanced US missile defence system to counter the growing threat from North Korea will not be discussed when defence chiefs meet at an Asian security forum on the weekend, South Korean defence officials said today.

"Recent North Korean missile tests showed the need for improved missile defences, even though the latest test launch on Tuesday was a failure," US Defense Secretary Ashton Carter said en route to the Shangri-La Dialogue, a three-day Asian security meeting being held in Singapore from Friday.

"There is no plan for discussions on THAAD at the Shangri-La Dialogue," a South Korean defence ministry official said. The official, who spoke on condition of anonymity, said separate talks on the missile defence system were continuing between South Korea and the United States.

"When the issues are coordinated, there will be an announcement," the official said.

A senior US defence official said there were still "a lot of technical issues to get through", but a public announcement would be made soon.

China and Russia oppose the deployment of THAAD, which operates powerful radar capable of penetrating deep into their territories. South Korea and the United States say it is needed in response to the heightened missile threat from North Korea.

Carter waved aside concerns expressed by China that deployment of the THAAD system’s radars on the Korean peninsula could upset the balance of power by reducing the strategic deterrence of China's ballistic missile system.

"The implementation will be a series of decisions that we take together and it’s for our own protection against North Korea. Everybody should understand that," Carter said.

North Korea's attempt to fire an intermediate-range missile on Tuesday failed, South Korea and the United States said, following three earlier failures to launch a Musudan missile, which has a design range of more than 3,000 km (1,800 miles).

In February, a North Korean rocket launch put an object into space, but that was seen as a cover for intercontinental ballistic missile development.

The North has conducted a series of tests since then, claiming to have made progress on missile technology.