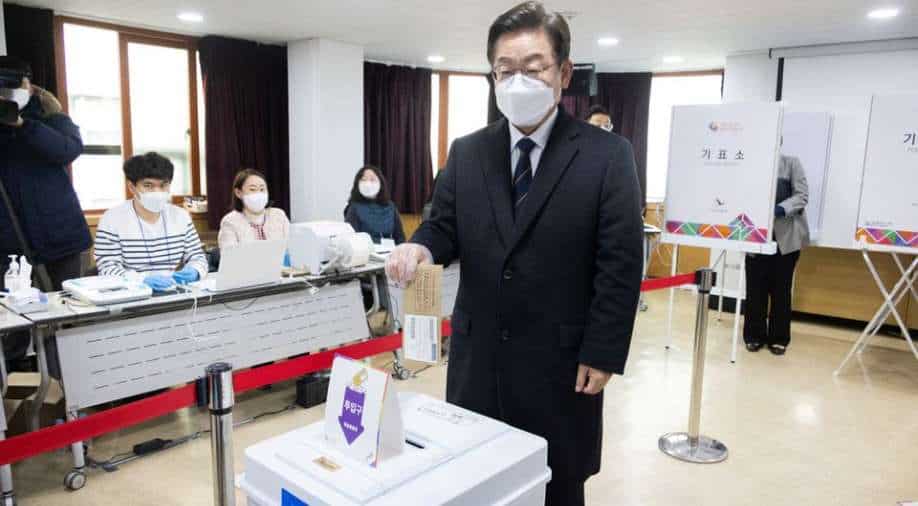 Fourteen candidates registered to run but the focus is on a tight two-way race between Lee Jae-myung, the standard-bearer of the ruling Democratic Party, and Yoon Suk-yeol, from the conservative main opposition People Power Party.

Some 44 million South Koreans headed to polls to elect their next president on Wednesday after a campaign marked by surprises, scandals and smears.

Voters are looking for a leader who can root out corruption, heal the divided nation and polarised politics, and initiate negotiations that succeed in curbing North Korea`s nuclear ambitions.

Fourteen candidates registered to run but the focus is on a tight two-way race between Lee Jae-myung, the standard-bearer of the ruling Democratic Party, and Yoon Suk-yeol, from the conservative main opposition People Power Party.

They are vying to succeed incumbent President Moon Jae-in, who is constitutionally barred from seeking re-election. The winner will begin his single, five-year term on May 10.

Polls last week showed a slight edge for Yoon, who secured a surprise, last-minute boost when a fellow conservative running a distant third dropped out and threw Yoon his support.

In the absence of opinion polls over the past six days, Yoon`s camp said on Monday it expected to win with a 10% margin, while Lee`s team predicted it would come out on top by 1-2%.

A former prosecutor general, Yoon has vowed to fight corruption, foster justice and create a more level playing field, while seeking a harder line toward North Korea and a "reset" with China.

Lee was governor of the most populous province of Gyeonggi and shot to fame with his aggressive coronavirus responses and advocacy for universal basic income.

Both candidates` disapproval ratings matched their popularity as scandals, mud-slinging and gaffes dominated what was dubbed the "unlikeable election".

Young voters who backed Moon but became disillusioned with economic problems and corruption scandals are seen as a key bank of support.

Lee Sung-jin, 33, said he was casting his ballot at a polling station in Seoul because he had heard that the turnout among people in their 20s and 30s would be important.

"As the current problems for young people concerning employment and housing prices are serious, I voted for a candidate who made a pledge to come up with solutions," he said, without specifying who he voted for.

South Korea reported a record daily high 342,446 new COVID-19 cases on Wednesday but the surge has hardly registered as an election issue, beyond some debate over how to compensate citizens and businesses.

With more than 1 million COVID patients treating themselves at home, election authorities tightened voting procedures for patients on Monday amid uproar over early voting irregularities over the weekend.

During Saturday`s special early voting for infected voters, some election workers collected ballots in shopping bags or plastic buckets to place in ballot boxes, and some voters reported receiving papers that had already been used.

Officials said there was no evidence of foul play but the chaos threatened to tarnish South Korea 35-year democratic history of tight and relatively transparent elections, and a mostly successful fight against COVID-19.

The race has already faced a number of disruptions.

In a rare incident of violence in a South Korean election, a man with a hammer assaulted the leader of the Democrat Party and slightly injured him on Monday while he was campaigning for Lee.