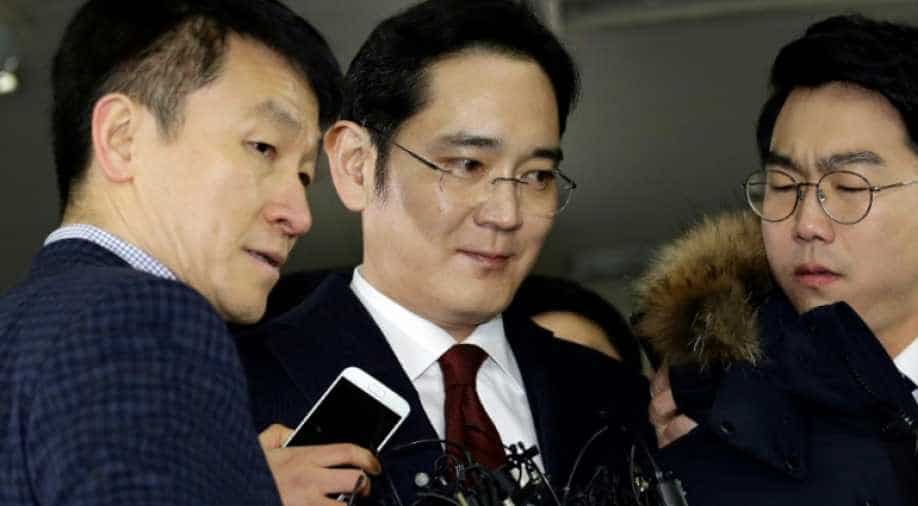 Lee and his lawyer were greeted by scores of journalists as well as dozens of protesters waving banners and chanting "arrest Lee immediately" and calling him a "co-culprit" in the scandal.? Photograph:( AFP )

Lee, chairman of Samsung Electronics and the son of the Samsung Group chairman Lee Kun-Hee, was to be questioned in connection to allegations of bribery, prosecutors said Wednesday.

He is also accused of committing perjury during a parliamentary hearing last month into the affair, Yonhap news agency reported.

"I am sorry for causing concern among the people over this incident", Lee said as he arrived at the office of the special prosecutor investigating the case.

Lee and his lawyer were greeted by scores of journalists as well as dozens of protesters waving banners and chanting "arrest Lee immediately" and calling him a "co-culprit" in the scandal.

The likelihood of prosecutors seeking a court warrant to formally arrest Lee was "high", an unidentified investigator was quoted by Yonhap as saying.

The scandal centres on Park's secret confidante Choi Soon-Sil, who is accused of using her ties to Park to coerce top firms into "donating" tens of millions of dollars to two non-profit foundations which Choi then used as her personal ATMs.

Samsung was the biggest contributor to the foundations. It is also accused of separately giving millions of euros to Choi to bankroll her daughter's equestrian training in Germany in a bid to curry favour.

Prosecutors have for months questioned Lee and other senior Samsung officials. The officials reportedly argued that although they were coerced to offer money, they sought no favours in return and thus the payments were not a bribe.

Lee was named a criminal suspect in the widening investigation on Wednesday.

Prosecutors are investigating whether Samsung bribed Choi in order to win state approval for a controversial merger which it sought in 2015.

The merger of two Samsung group units -- Cheil Industries and Samsung C&T -- was seen as a crucial step towards ensuring a smooth third-generation power transfer to Lee Jae-Yong.

It was criticised by many, who said it wilfully undervalued Samsung C&T's stocks. But the National Pension Service -- a major Samsung shareholder -- voted in favour of the deal and it eventually went through.