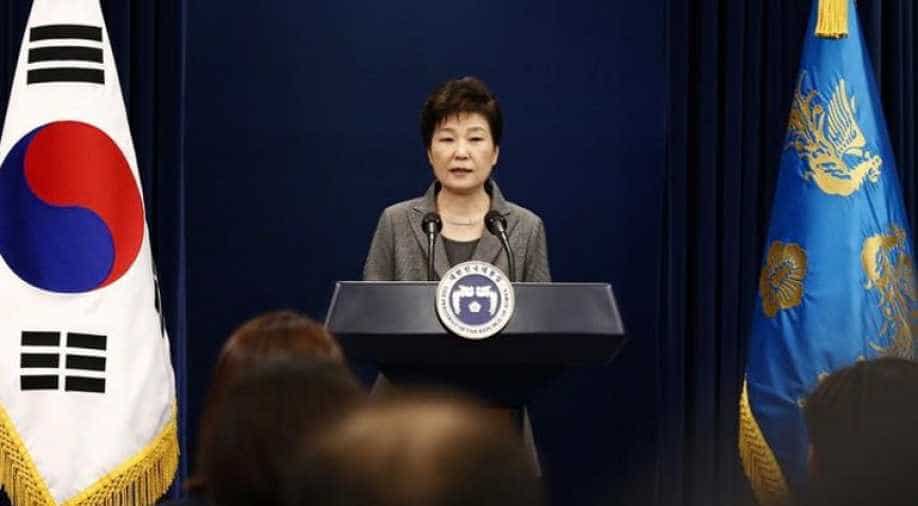 Though Park has apologised over the influence-peddling scandal involving her long-time confidante Choi Soon-Sil, who has been arrested for fraud and abuse of power, the move has not helped improve her ratings. Photograph:( Reuters )

South Korean President Park Geun-hye's approval rating remained at a record low of four per cent, according to a Gallup Korea opinion poll released on Friday, amid a growing political scandal. Gallup Korea, based in Seoul, is not affiliated with US-based Gallup Inc.

Park is under intense pressure to step down over a corruption scandal involving a close friend accused of meddling in state affairs. Large rallies have been held weekly demanding that she resign or be impeached.

Park is South Korea's first female leader, and also has the dubious distinction of being the first sitting president subject to a criminal probe while in office.

Media outlets like Channel News Asia describe South Koreans as poised before their TV, not wanting to miss the moment the president officially loses power. But Al Jazeera reports that what seemed like an inevitable impeachment may be delayed further, or may not even take place after all.

Though Park has apologised over the influence-peddling scandal involving her long-time confidante Choi Soon-Sil, who has been arrested for fraud and abuse of power, the move has not helped improve her ratings. Choi is also accused of interfering in government affairs, despite holding no official position.

The New York Times reports that Choi is the daughter of the founder of an "obscure sect" called the "Church of Eternal Life", and a longtime friend of Park.

Vox states that Choi has been indicted on charges of manipulating the president for profit, including using her relationship with Park to extract almost $70 million in donations from large companies to two nonprofit foundations she runs. Prosecutors allege Choi then siphoned some of this money for her own use, Vox reports.

"Once lawmakers come up with measures to transfer power in a way that minimises any power vacuum and chaos in governance, I will step down," Channel News Asia cites Park saying in a live video address.

Critics said Park's statement was a stall tactic designed to split opinion on her fate among her own party, and also among the three opposition parties. The opposition requires a two-thirds majority in the national assembly to pass a motion for Park's impeachment, Channel News Asia reports.