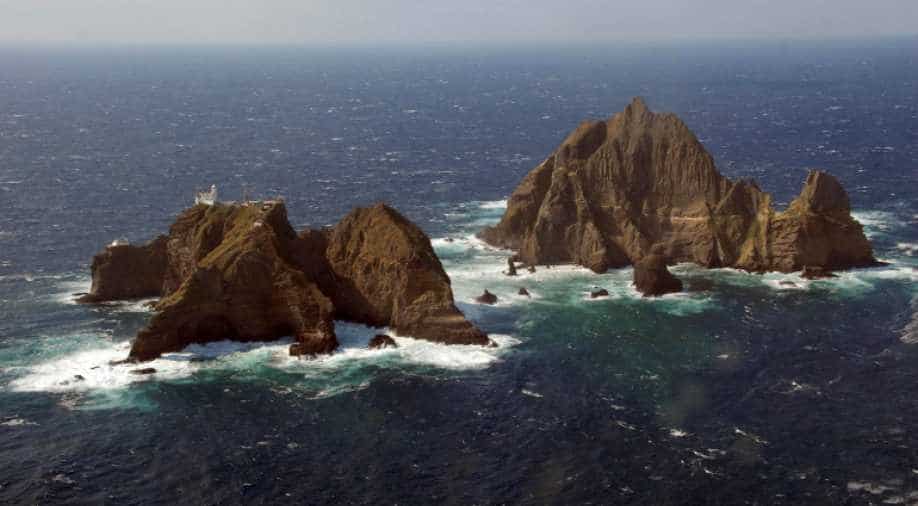 An aerial view shows a part of the group of islets known in South Korea as Dokdo and in Japan as Takeshima in the Sea of Japan (file photo). Photograph:( Reuters )

Seoul and Tokyo have been at odds over the sovereignty of the islets called Dokdo in South Korea and Takeshima in Japan, which lie about halfway between the neighbours in the Sea of Japan, also known as the East Sea

South Korean's military began annual drills on Tuesday around a set of islands also claimed by Japan, days after planned talks between the two countries' leaders were called off amid a spat over an Olympics map.

Seoul and Tokyo have been at odds over the sovereignty of the islets called Dokdo in South Korea and Takeshima in Japan, which lie about halfway between the neighbours in the Sea of Japan, also known as the East Sea.

The decades-long territorial row was rekindled after South Korea lodged a protest over a map on the Tokyo Olympics website marking the islands as Japanese territory.

Tokyo rejected Seoul's demand to remove the depiction of the islets in the Olympics map. South Korea asked the International Olympic Committee to mediate the dispute, and some South Korean politicians called for a boycott of the Games.

Relations between the two Asian neighbours have been frosty amid feuds over the islets, trade and the issue of compensation for victims, who were forced work in Japanese firms and military brothels during Japan's 1910-45 colonial rule.

Naval, air and coast guard forces will join the drills, which will be staged mostly on the sea with minimal contact between troops due to coronavirus concerns, Seoul's defence ministry said.

An official at South Korea's foreign ministry said on Tuesday that the meeting could not be held, without specifying why.

When asked if a dispute over the drills was the reason, the official said: "the exercises are regularly held every year for the purpose of defending our territory."

The Korean drills around the islets have taken place twice a year since 1986, prompting frequent protests from Japan.

Japan's chief cabinet secretary Katsunobu Kato on Monday denied the Yonhap report, saying it was 'one-sided' and the talks did not come off due to scheduling difficulties.

On Tuesday, Kato said Tokyo had lodged a protest with Seoul over the exercises, saying the islands are Japanese territory under history and international law.

"This sort of drill is unacceptable and extremely regrettable," he told a news conference. "We`ve protested to the South Korean government and called for them to be halted."