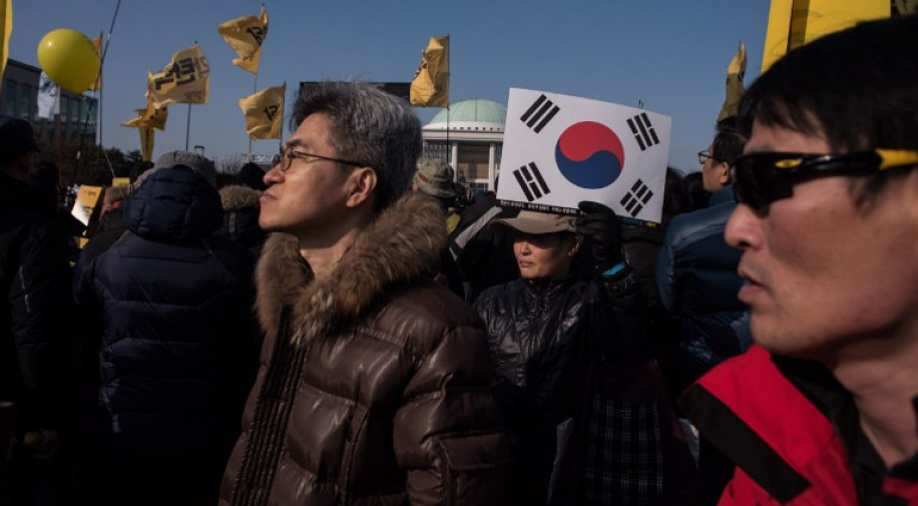 State prosecutors have accused Park of colluding with a longtime friend to extort money and favours from the country's largest companies and allow her confidante to manipulate government affairs from the shadows. Photograph:( AFP )

Large crowds of South Koreans were expected to march in the streets today, calling for the permanent removal of impeached President Park Geun-hye and extending the historically biggest protest movement in the country to Christmas Eve.

The protest comes as a special prosecutor widens an investigation into a corruption scandal surrounding Park, which saw millions of people take to the streets before the country's opposition-controlled parliament on Dec 9 voted to impeach her.

Organisers expected Saturday's rally in Seoul to be festive, but there was tension as Park's conservative supporters planned to gather in nearby streets.

The Constitutional Court has up to six months to decide whether Park should permanently step down or be reinstated. Her presidential powers are suspended until then, with the prime minister serving as the government caretaker.

State prosecutors have accused Park of colluding with a longtime friend to extort money and favours from the country's largest companies and allow her confidante to manipulate government affairs from the shadows.

They have now handed over their investigation to special prosecutor Park Young-soo, whose team on Saturday was planning to summon the president's arrested friend, Choi Soon-sil.

Investigators earlier on Saturday summoned the country's former vice sports minister Kim Chong, who among other allegations is suspected of helping Choi wrest money and favours from Samsung, the country's largest business group.

Samsung is under suspicion that it sponsored Choi to win government backing for a controversial merger deal between two affiliates last year that helped promote a father-to-son transfer of leadership and corporate wealth at the group.

Samsung scion Lee Jae-yong, son of ailing group chairman Lee Kun-hee, has apologised over the use of corporate funds to buy a horse for Choi's daughter, Yoora Chung, an equestrian athlete, but denied that Samsung sought favours from Choi or Park's administration.

The National Pension Service, which was raided Wednesday, supported the merger between the two Samsung affiliates even though the fund's stake in one of the companies lost an estimated hundreds of millions of dollars in value.

Samsung is also one of the country's major companies that gave a combined 77.4 billion won ($65 million) to two non-profit foundations Choi allegedly controlled and abused to expand her personal wealth.