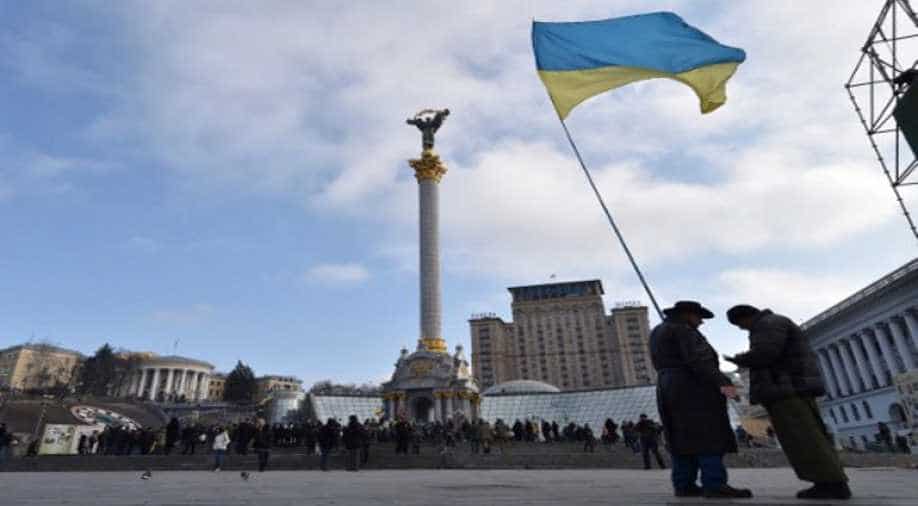 The area around Kurakhove, just west of the pro-Russian rebels` de facto capital Donetsk, has seen some of the conflict`s bloodiest battles. Photograph:( AFP )

Follow Us
As football fans prepare for the climax of the Euro 2016 tournament in France, battle-hardened Ukrainian troops are playing their own tournament against locals near the front in the war-scarred east.

"After completing your watch at the front with a machinegun in your hands, standing knee-deep in mud in the trenches, you think about only about getting some sleep, not training," shared 37-year-old Ukrainian soldier Oleksandr Demchenko, as exploding shells reverberated around him.

But in spite of their exhausting missions, many of the fighters arrive to play straight from the battlefield.

Some still had mud on their boots as they prepared to take to the slippery pitch in the government-held town of Kurakhove, a community of 20,000 mostly blue-collar workers about 20 kilometres (12 miles) from the front.

The area around Kurakhove, just west of the pro-Russian rebels' de facto capital Donetsk, has seen some of the conflict's bloodiest battles.

The competition is intended to relieve tension and bring a sense of normality to the frontline of the 26-month war that has claimed nearly 9,500 lives.

The teams facing the soldiers are made up of local athletes who support the pro-EU revolution that shattered Ukraine`s ties with Russia and set it on a collision course with its eastern neighbour in February 2014.

"Our tactical level of play is much poorer than that of the professional athletes. But our motivation is higher," Demchenko said with a smile.Members of Ukraine`s 10th assault brigade have had no access to television or radio since being dispatched to the area, a couldron of violence that several ceasefires have failed to quench.

But despite their isolation, the soldiers are keenly aware of developments in France, and their own team's humiliation.

'And football distracts us from the war'

Ukraine had the dubious honour of being the first to be knocked out after losing all their matches without scoring a goal.

Many of the forces have switched their allegiance to Iceland, the minnows that shocked the world by beating England and getting to the quarterfinals before being drubbed by the hosts Sunday.

"They are close to us in spirit," Demchenko said. "You can see that the Icelandic footballers are real fighters."A number of players on one of the teams of local civilians admitted they are actually rooting for the soldiers in the tournament that has been timed to coincide with Euro 2016.

Dressed in a green kit, Kurakhove team member Grygoriy, 27, said that winning is not important.

"Everyone feels the impact of this war, and with us being so close to the front, we feel it especially hard," Grygoriy said as a steady drizzle mixed with the sweat on his face.

"And football distracts us from the war."

A soldier dressed in a traditional Ukrainian broidered shirt who identifies himself by the `nom de guerre` Uragan (Hurricane) agreed.

"Victory is not important here," he said. "The locals just have to have a chance to get their minds off the war and the horrible conditions in which they live in."

The contest of 17 teams ultimately ended with victory for one of the local sides, which received strong support from Lyubov, a pensioner who lives in an apartment block overlooking the school yard in which games are played.

Standing on the balcony, Lyubov said: "It is much better to kick around a ball than to fight."

Ukranian fighter Demchenko said he would even be prepared to play pro-Russian insurgents from nearby Donetsk, raising the prospect of an encounter reminiscent of when English troops downed their weapons to play football with German soldiers in the trenches during World War I.

"Why not? They are guys just like us," he said.

"A match like that would be a much better way to resolve this conflict."