A small plane crashed into a house north of the Philippine capital on Saturday, killing at least seven people, officials and media said.

The Piper 23 Apache twin-engined aircraft, operated by Lite Air Express, had just taken off from a small nearby airport, said Eric Apolonio, spokesman for the Civil Aviation Authority of the Philippines (CAAP).

It was carrying six people, including two pilots, and was en route to Laoag in northwestern Luzon.

Seven people, including the six people on board, were killed, radio station dZMM and CNN Philippines reported.

“Investigation revealed that the said aircraft took off at the runway of Plaridel Airport but unluckily crashed at the residential area,” Philippine police spokesman Chief Superintendent John Bulalacao said in a text message.

Police and the CAAP did not give details on the number of casualties. 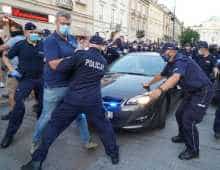