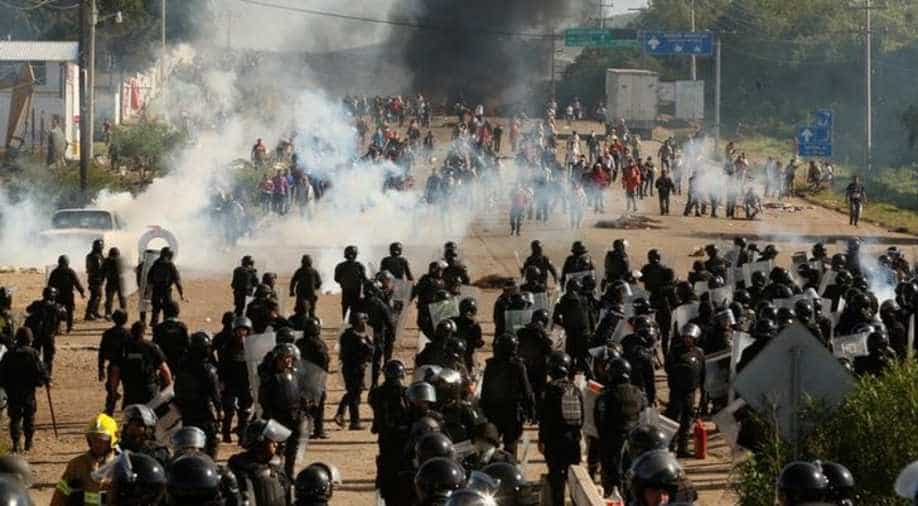 The violence erupted as police threw tear gas at the protesters to end a week-long barricade that was blocking a road in Asuncion Nochixtlan, a town in Oaxaca state, where some vehicles were set on fire. Photograph:( Reuters )

Unknown gunmen opened fired as police and teachers clashed in southern Mexico on Sunday during a protest that left six people dead and more than 100 injured, authorities said.

The violence erupted as police threw tear gas at the protesters to end a week-long barricade that was blocking a road in Asuncion Nochixtlan, a town in Oaxaca state, where some vehicles were set on fire.

The National Education Workers' Coordinator (CNTE) union has been leading protests in Oaxaca for days against an education reform and the arrest of two of its leaders.

The National Security Commission initially denied that officers were armed and claimed that news pictures showing them with guns were "false".

Federal police chief Enrique Galindo later said that an armed unit was deployed after unidentified people "fired weapons on police and the population".

"The teachers were not even involved in these things," Galindo said at a news conference.

"There are reports of the presence of various violent groups that have headed the blockades of roads and strategic installations for days," the federal and state governments said in a joint statement, urging the CNTE to distance itself from these unidentified groups.

Another 55 federal and state officers were injured, including eight by gunshots, Ruiz Martinez said. At least 53 civilians were injured.

Paramedics said that three of those killed had bullet wounds. One was a minor and the other two were 23 and 28. The paramedics spoke on condition of anonymity because they were not authorised to speak publicly.

It was not immediately clear how the other three were killed.

At least 21 people were arrested.

The CNTE, considered a radical wing of a national union, denounced in a statement the "repressive action of the federal and state governments".

Many of the injured people were taken to the town's church before being transferred to hospitals. Several are in "critical" condition, the government said.

A municipal police officer, who requested anonymity, said a firebomb was thrown on the town's municipal building.

Protesters, some wearing masks, also gathered in the tourist city of Oaxaca, the state capital, where they prepared Molotov cocktails and burned material on the street to form barricades near the central plaza in anticipation of the arrival of police.

Shops closed and the streets were deserted.

"The resistance is peaceful but we are preparing barricades for the evacuation and excessive repression by the government of President Enrique Pena Nieto," said a spokesman for the CNTE's Section 22, who declined to give his name for fear of reprisals.

"They didn't want to have dialogue. They said there was no going back," on the education reform, he said.

The union has also been protesting last weekend's arrest of the leader of its Section 22 in Oaxaca, Ruben Nunez, and his deputy, Francisco Villalobos. Nunez faces money laundering charges, while Villalobos has been accused of stealing textbooks.
(AFP)