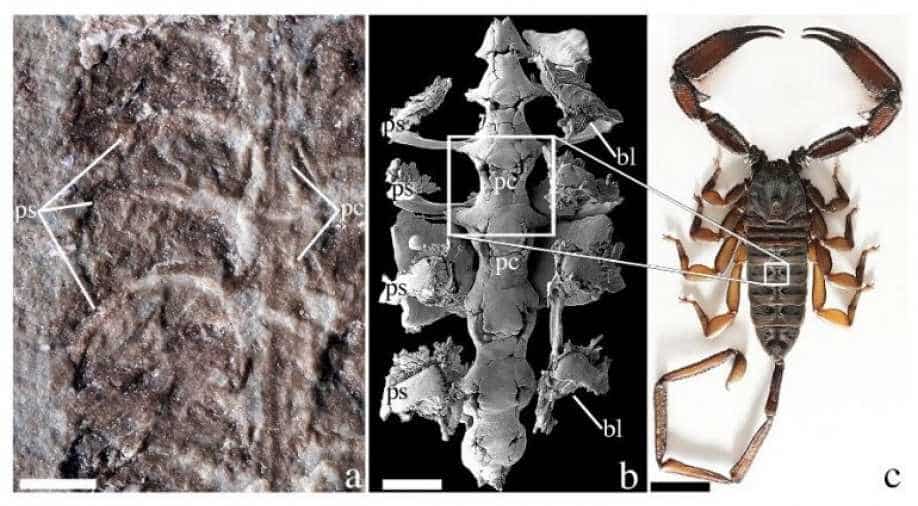 Scorpions are said to be one of the first animals to have become fully land-dwelling,  experts say the two new fossils add to a growing debate about when animals made the shift

Ancient Scorpions are known to be the first animals to set foot on land, said Fossile experts.

The earliest animals were aquatic but transitioned on to land. Scorpions are one of the animals to have become fully land-dwelling, experts say.

They are 2.5 cm in length and lived around 437m years ago, the fossil discovered in a quarry north of state highway 164 in Wisconsin in the 1980s.

“The fossil was found in a shallow water setting and so it is likely this animal lived in both environments,” said Dr Andrew J Wendruff, a palaeontologist at Otterbein University, Ohio, and co-author of the research. Although he said the team cannot be sure it scuttled ashore. A move to terra firma would have offered advantages, said Wendruff.

The creature has been named "Parioscorpio ventor", which means ancestral scorpion and hunter. It's similar to the modern scorpion with two large claws and a tail with a sting at its end.

The most exciting part is its internal structure says the team behind the discovery.

“This scorpion had the respiratory structures that indicate it was able to live on land. It is the earliest evidence we have that an animal could do this,” said Wendruff.

Wendruff added that such structures, as well as other features of the animal’s cardiovascular system, suggested the ancient animal was, like modern scorpions, able to breathe air. The team say the features are also similar to those seen in horseshoe crabs, which live in shallow coastal waters but can venture on to land for brief spells.

“Throughout all of Earth’s history, there is a race to utilise resources that are not being used. Land – something we take majorly for granted was barren by today's standards,” he said.

The discovery published in the journal Scientific Reports goes back to the date of the earliest known scorpion almost by three million years ago. The previous record-holder a species was discovered by a Victorian palaeontologist in the Pentland Hills in Scotland.

Dr Jesus Lozano-Fernandez, a palaeobiologist at the Institute of Evolutionary Biology of Barcelona, said it was a matter of much debate whether the earliest scorpions were indeed aquatic – a theory the new discovery piled further doubt on, he said.

“If the described fossil scorpion was indeed terrestrial, that would suggest that [other arachnids with similar breathing apparatus such as spiders], at least, or even the whole [of] arachnids would already have colonised the land by that time.”