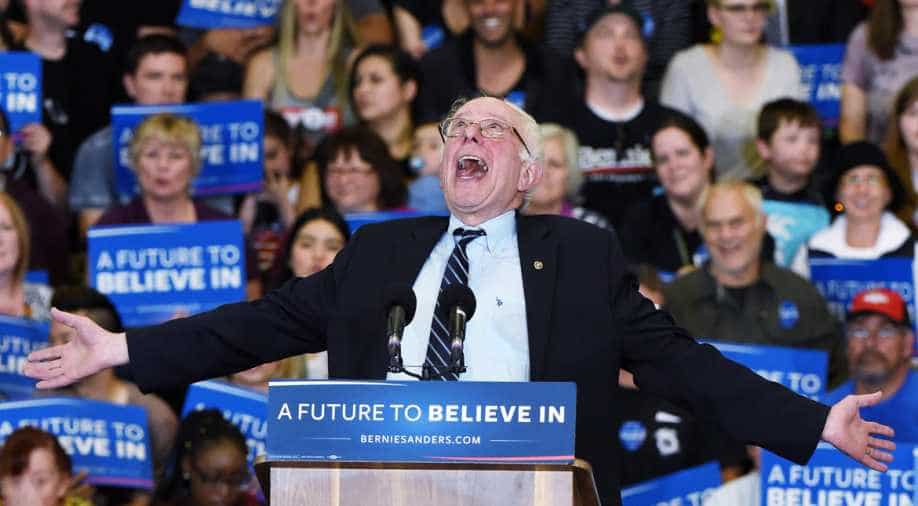 Follow Us
Bernie Sanders upstart US presidential campaign may be headed to defeat, but his goals of reining in Wall Street, ending big money in politics and eradicating income inequality were the big winners in the Democratic race.

Sanders, who started as a little-known long-shot, pushed the party and established front-runner Hillary Clinton sharply to the left during a long primary battle.

Along the way, the 74-year-old US senator from Vermont energized young and progressive voters and prepared the ground for what his allies predict will be a lasting influence on the party.

Clinton, one of the best-known political figures in the United States, clinched the Democratic Party's nomination in a last round of state nominating contests on Tuesday. But even before her victory, Sanders began taking steps to turn his newfound political influence into an enduring progressive movement.

In the last few weeks, he has lent his influence and fundraising power to progressive congressional and state legislative candidates who share his agenda, urging his supporters around the country to donate to their campaigns.

Sanders also appointed prominent activists to the panel writing the issues platform for the party's convention in July, ensuring a strong voice in the process.

His convention delegates will push for changes to party primary rules, including letting independents vote in primaries and reducing the influence of superdelegates, the hundreds of party elites who can support any candidate regardless of voting in their constituencies, and who in this primary season have largely backed Clinton.

"I do think we are going to see real changes in the Democratic Party going forward because of Bernie. The future of the party is with the people supporting Sanders," said Charles Chamberlain, executive director of Democracy for America, a liberal Vermont-based group that rose from Howard Dean's failed 2004 presidential bid and endorsed Sanders this time.

"He has proven the power of this message," Chamberlain said.

During the campaign, Sanders forced Clinton to tack left repeatedly on issues ranging from her support for a higher minimum wage to her opposition to the Asian trade pact and Keystone XL oil pipeline.

Sanders' progressive allies said those shifts by Clinton will be helpful in the November 8 election against presumptive Republican nominee Donald Trump, who has touted an anti-trade and pro-jobs economic agenda, and for Democrats in their efforts to recapture a majority in the US Senate.

"When the story of the 2016 election is told, a major part of it will be that Bernie Sanders helped the Democratic Party turn up the volume on economic populism issues," said Adam Green, co-founder of the liberal Progressive Change Campaign Committee.

If Democrats win back the Senate in the November election, Sanders will be in line for either the chairmanship of the Budget Committee or the Health, Education, Labor, and Pensions committee, both powerful platforms to advance his ideas.

Chamberlain said Sanders would create a formidable one-two punch in the Senate with Elizabeth Warren, a Massachusetts senator who has been the leader of the party's progressive wing.

"Bernie Sanders is going to fight all the good fights," he said. "With Bernie Sanders and Elizabeth Warren we're going to see a Senate team that will be very powerful."

Sanders' investment in the next generation of progressive politicians, meanwhile, is aimed at spawning a new generation of liberals who back his agenda.

He has sent emails to his grassroots fundraising list urging his donors to back six insurgent congressional candidates and eight statehouse candidates who echo his economic message, sparking a flood of donations to their campaigns. More endorsements are expected.

"Our movement is so powerful that we can change congressional elections overnight. Let's keep going," Sanders said on Tuesday in an email to supporters asking them to support two more candidates for Congress - Eric Kingson in New York and Paul Clements in Michigan.

Justin Bamberg, a first-term state representative from South Carolina, said he received about $70,000 in small-dollar donations after Sanders sent an email to his supporters backing Bamberg. In Bamberg's first campaign, he raised $21,000 during the entire cycle, he said.

Terry Alexander, a South Carolina state representative backed by Sanders, said he also had received about $70,000 in donations after the Sanders email. The money freed him from worrying about raising funds, giving him more time to focus on meeting voters, he said.

"It has made a difference in how people see my candidacy, it's created a lot of enthusiasm and a tremendous boost in fundraising," he said.