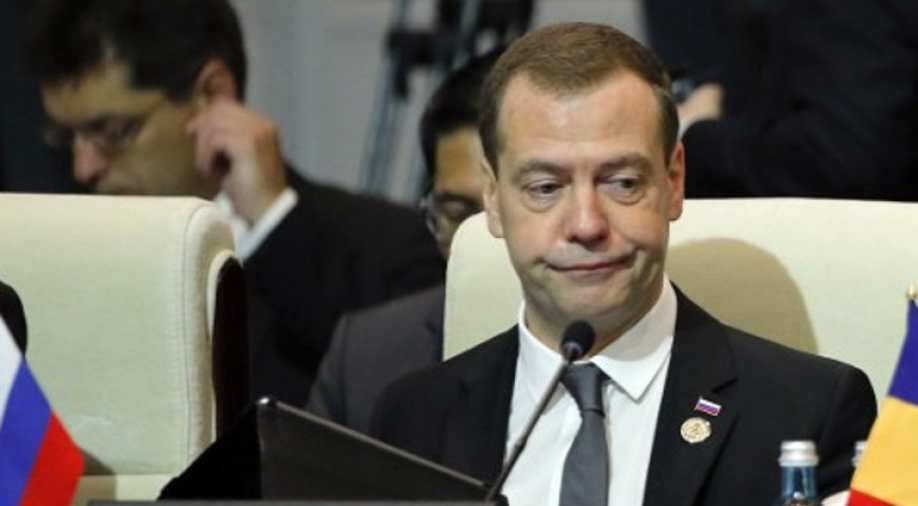 The Russian PM said the Trump administration has shown 'total weakness' by handing over executive power to Congress ||The legislation targets the Russian energy sector, giving Washington the ability to impose sanctions on companies involved in developing Russian pipelines

Russian Prime Minister Dmitry Medvedev labelled new US sanctions "economic war", as businesses in Moscow pledged on Thursday to shrug off the impact of the measures approved reluctantly by Donald Trump.

The US president signed off on the new sanctions Wednesday, bowing to domestic pressure after the White House failed to scupper the bill or water it down.

Expecting the move, Moscow already responded to the measures last week after they were passed by the Senate, ordering the US to slash staff at its diplomatic mission in Russia by 755 personnel.

The Kremlin said Trump's formal approval did not "change anything" and no further retaliation was planned.

But Prime Minister Medvedev fumed Wednesday evening on Facebook that the move "ends hopes for improving our relations with the new US administration."

"It is a declaration of a full-fledged economic war on Russia," Medvedev wrote.

"The Trump administration has shown its total weakness by handing over executive power to Congress in the most humiliating way."

Trump signed the legislation behind closed doors and then bashed it in an angry statement as "significantly flawed."

"In its haste to pass this legislation, the Congress included a number of clearly unconstitutional provisions," he said, including curbs on the president's ability to "negotiate" with Russia.

"As president, I can make far better deals with foreign countries than Congress," Trump claimed.

The legislation - which also includes measures against North Korea and Iran - targets the Russian energy sector, giving Washington the ability to impose sanctions on companies involved in developing Russian pipelines, and placing curbs on some Russian weapons exporters.

It constrains Trump's ability to waive the penalties - a statement of mistrust from the Republican-controlled Congress, which remains unsettled by the billionaire's warm words for President Vladimir Putin.

The head of Russia's largest oil firm Rosneft -- which has already been targeted by earlier US sanctions imposed over the Ukraine crisis -- promised the company would try to avoid more pain.

"We will seek to work in such a way as to minimise the impact of the sanctions," Igor Sechin told Russian news agencies, adding that sanctions had "started backfiring" to damage American interests.

Iran reacted angrily, saying the new sanctions against it "violated" its 2015 nuclear deal with world powers, and warned it would respond "appropriately."

The sanctions seek to penalise the Kremlin for allegedly meddling in the 2016 US presidential election and for Russia's annexation of Crimea.

Washington has already slapped several rounds of sanctions on Moscow over Ukraine since 2014, and in December then leader Barack Obama turfed 35 Russian diplomats out due to accusations of election interference.

Trump said he would "honour" some of the new bill's provisions, but stopped short of saying it would be fully implemented.

The White House said only that Trump would give Congress's "preferences" mere "careful and respectful consideration."

"I am signing this bill for the sake of national unity. It represents the will of the American people to see Russia take steps to improve relations with the United States," Trump said.

Trump had received the legislation at 1:53 pm on Friday, but waited until Wednesday to sign it.

The delay had raised speculation that Trump might veto or try to somehow shelve the sanctions, which were approved in a 98-2 Senate vote.

By signing it, he avoided the humiliating prospect of Congress overriding his veto.

Expecting the signature, Moscow preemptively ordered Washington to reduce its diplomatic presence in Russia to 455 people before September 1 -- bringing it in line with the size of Russia`s mission in the United States.

The foreign ministry in Moscow said sanctions against Russia had put global stability at risk, calling them a "dangerous" and "short-sighted" policy.

"We have already shown that we are not going to leave hostile acts unanswered... and we obviously reserve the right to take retaliatory measures," it said.

US Secretary of State Rex Tillerson said he will meet with his Russian counterpart Foreign Minister Sergei Lavrov over the weekend, but warned US-Russia ties could still get worse.

Tillerson said the US Congress`s decision to pass the sanctions bill had made attempts to thaw ties "more difficult."

A special prosecutor is investigating whether Trump advisers colluded with what US intelligence has concluded was an attempt by Russia to covertly support the real estate mogul`s 2016 campaign.

The US president, who often called for warmer ties with Moscow during the White House race, has furiously denied the charge.