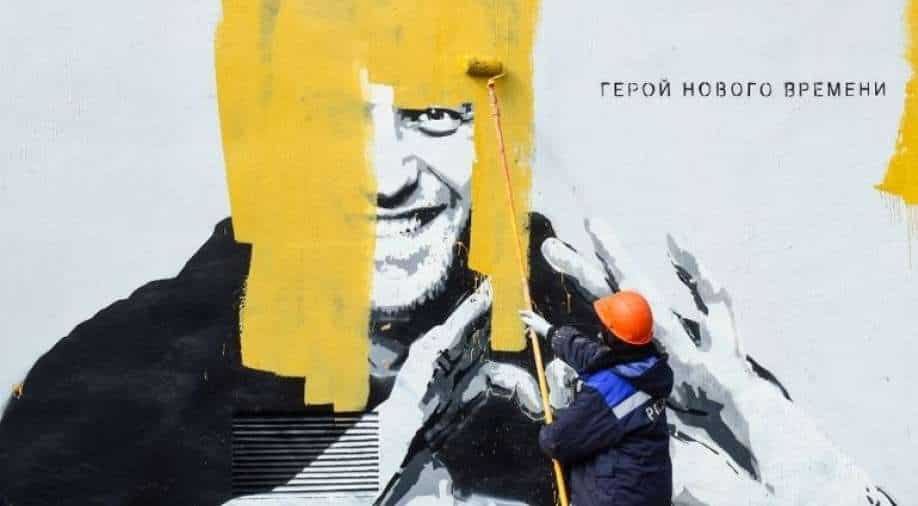 File photo: A worker paints over graffiti of jailed Kremlin critic Alexei Navalny in Saint Petersburg on April 28, 2021. The inscription reads: "The hero of the new times". Photograph:( AFP )

Navalny, President Vladimir Putin's fiercest domestic critic, is serving a two and a half year sentence for parole violations he calls trumped up.He was arrested after flying back from Germany where he had recovered from a nerve agent poisoning.

Russian authorities announced a new criminal charge against Kremlin critic Alexei Navalny on Wednesday, the latest move in a crackdown ahead of September`s parliamentary election that could add as much as three years to his prison term.

Navalny, President Vladimir Putin`s fiercest domestic critic, is serving a 2-1/2-year sentence for parole violations he calls trumped up. He was arrested after flying back from Germany where he had recovered from a nerve agent poisoning.

Navalny and his allies have faced pressure for years, but his political network was outlawed in June after a court formally labelled his anti-corruption foundation and regional campaign groups as extremist.

The Investigative Committee, which probes serious crimes, said in a statement that Navalny had been charged with creating an organisation that "infringes on the personality and rights of citizens", a crime punishable by up to three years in jail.

It said that his Anti-Corruption Foundation had incited Russians to break the law and take part in unauthorised protests demanding his release in January that authorities said were illegal.

The opposition politician`s allies who post on social media under the name Team Navalny described the accusation as "the latest meaningless charge".

"No one infringes on the personality and rights of citizens like Putin himself and all his henchmen, including the Investigative Committee," they said on Telegram messenger.

The charge comes a day after the Investigative Committee on Tuesday announced a new criminal investigation into two close Navalny allies, who are based abroad, for raising funds for his political network.

On Sunday, Russian media outlets reported that Lyubov Sobol, a close Navalny ally, had left Russia and flown to Turkey. She has not commented on her whereabouts and her allies have declined to comment.