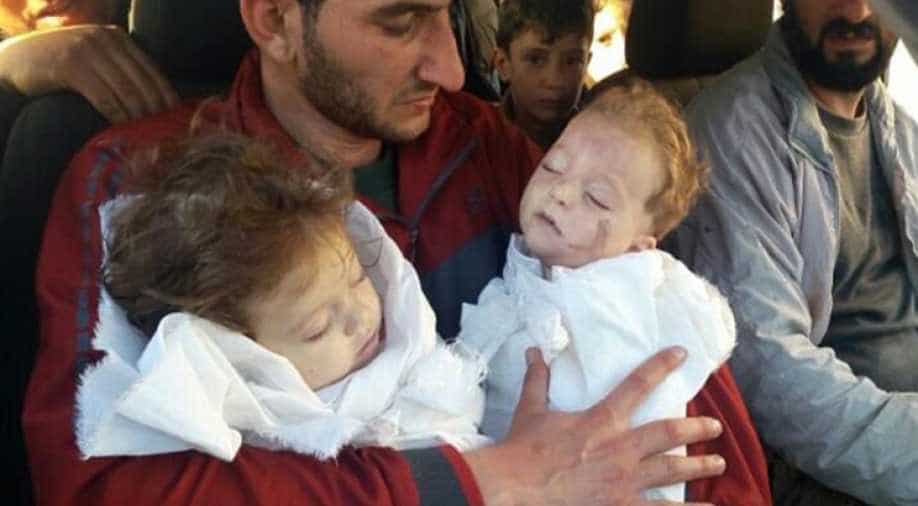 Father showing off his twin boy and girl who were killed in the 'sarin gas massacre' in Khan Sheikhoun. Photograph:( Zee News Network )

"We believe that the report turned out to be superficial, unprofessional and amateurish," said Mikhail Ulyanov

Russia dismissed today a report by a UN-led panel that blamed the Syrian regime for a sarin attack on the town of Khan Sheikhun and said the use of the substance was part of a "theatrical performance" by rebels.

A panel including diplomats and military officers presented Moscow's version of events complete with diagrams and satellite imagery, saying the Syrian regime did not carry the blame for the April attack which killed over 80 people.

"We believe that the report turned out to be superficial, unprofessional and amateurish," said Mikhail Ulyanov, head of the foreign ministry's security and disarmament department.

"The mission did their research from a distance, that in itself is a scandal."

He said "the use of sarin has been confirmed" but insisted it was not delivered by an aerial bomb but rather used "as a theatrical performance, a provocation" by the rebels.

At least 87 people died on April 4 this year when sarin nerve agent projectiles were fired into Khan Sheikhun, a town in the Idlib province of northwestern Syria.

Images of dead and dying victims, including young children, in the aftermath of the attack provoked global outrage and a US cruise missile strike on a regime air base.

A joint panel by the United Nations and the world's chemical watchdog Organisation for the Prohibition of Chemical Weapons (OPCW) concluded that the Syrian regime was responsible, and that the air force had dropped a bomb on the town, releasing the deadly nerve agent.

Russia and Syria have, however, presented an alternative theory that an explosive device was set off on the ground.

Ulyanov today suggested the sarin gas was poured inside the crater left by the bomb.

Ulyanov spoke as part of a panel of foreign ministry, air force and other Russian officials presenting slides that showed elaborate diagrams of regime war planes' trajectories and satellite images in an effort to cast doubt on the UN report.

The Russian officials also showed video footage of rescue personnel working in the crater wearing "only respirators and cotton gloves."

Ulyanov claimed the video had been filmed after rebels detonated the bomb on the asphalt and before the sarin gas was poured into the crater.

Ulyanov also said witnesses cited in the UN report were not confirmed to have been in the town on April 4 and "could have been sunning themselves on a beach in the United Arab Emirates."

"This unconscionable attack marks the fourth time that the JIM has confirmed that the Assad regime used chemical weapons, underscoring the brutal and horrifying barbarism of Bashar al-Assad and making the protection provided by Russia even more egregious," Trump's spokeswoman Sarah Huckabee- Sanders said.

"Russia's attempts to undermine and eliminate the JIM show a callous disregard for the suffering and loss of life caused by the use of chemical weapons and an utter lack of respect for international norms," she added.

Despite criticising the work of the UN-OPCW on the report, Ulyanov said Russia would present a draft resolution extending its mission in Syria, following a veto on a similar US proposal in the Security Council last week.

Russia previously opposed renewing the mandate of the panel, known as the Joint Investigative Mechanism, prior to the release of the Khan Sheikhun report.