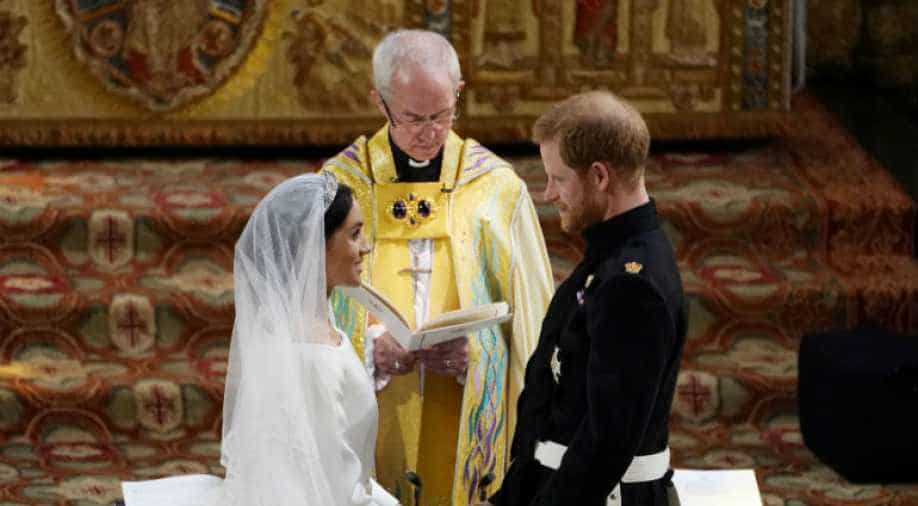 Britain's Prince Harry, Duke of Sussex (R) and US actress Meghan Markle (L) stand facing each other hand-in-hand before Archbishop of Canterbury Justin Welby (C) during their wedding ceremony in St George's Chapel, Windsor Castle, in Windsor, on May 19, 2018. Photograph: AFP

Catch all the live updates as Prince Harry and Meghan Markle walk down the aisle.

Catch all the live updates as Prince Harry and Meghan Markle walk down the aisle.

The day has finally arrived. One of the most anticipated weddings of the year will take place in Windsor Castle in the UK today. Prince Harry, sixth-in-line to the British Throne, will marry American actress Meghan Markle at the 15th Century St George`s Chapel in Windsor Castle.

Earlier today, Prince Harry was given the title Duke of Sussex by his grandmother Queen Elizabeth on Saturday, Buckingham Palace said, meaning his American fiancee Meghan Markle will become a duchess after the couple wed later.

British royalty is expected to hobnob with Hollywood royalty at the wedding. Indian actress Priyanka Chopra is also expected to attend the wedding as she is known to be friends with Markle.

Prince Harry's elder brother Prince William will be the groom's best man while his daughter, three-year-old Charlotte will be one of the bridesmaids.

Flowers and foliage surround the High Altar of St George's Chapel at Windsor Castle for thewedding of Prince Harry to Meghan Markle. May 19, 2018. (Reuters) The entrance of St George Chapel, where Prince Harry and Meghan Markle are to wed- has been beautifully decorated with white flowers. (Image via Reuters) Guests have already started arriving at Windsor castle. Oprah Winfrey, dressed in a pale pink dress and a matching hat is one of the early arrivals at the wedding. Actor Idris Elba was also seen arriving early along with his wife and Oprah. Meghan Markle's father pulled out on Monday creating a bit of confusion as to who would walk the bride down the aisle. On Friday, On Markle's request, Prince Charles agreed to walk his daughter-in-law down the aisle.

"Meghan Markle has asked His Royal Highness The Prince of Wales to accompany her down the aisle of the Quire of St George`s Chapel on her Wedding Day," Harry`s office Kensington Palace said in a statement.
"The Prince of Wales is pleased to be able to welcome Ms Markle to The Royal Family in this way," the palace said.

Meghan Markle's friend, Indian actress Priyanka Chopra arrived at Windsor ahead of the wedding. Chopra chose a lilac outfit and completed her look with a matching hat.

Here’s the first glimpse of @priyankachopra at #TheRoyalWedding with #JamesCohen... The groom dressed in formal attire arrives at St George's Chapel along with his best man, Prince William.

The bride, Meghan Markle, meanwhile has left her hotel for the wedding venue. She is being accompanied by her mother.

Watch: From Oprah to Priyanka Chopra to James Blunt- all the guests at the royal wedding.

The bride kept her style understated for her wedding day as she wore a Givenchy gown.

Markle wished to include all the countries of the Commonwealth be included in her bridal attire. Ms. Waight Keller designed a veil representing the distinctive flora of each Commonwealth country united in one spectacular floral composition.

The veil is held in place by Queen Mary's diamond bandeau tiara, lent to Ms. Markle by The Queen. The diamond bandeau is English and was made in 1932, with the entre brooch dating from 1893.

The Archbishop of Canterbury declares Prince Harry and Meghan Markle as husband and wife.

Justin Welby, head of the Church of England, made the proclamation after the couple promised to love and cherish one another “till death us do part,” and exchanged rings.

The Archbishop of Canterbury joins the couple's right hands together and proclaims them husband and wife #RoyalWedding pic.twitter.com/KOVegcknHw

As they emerged from the chapel after their wedding ceremony, Prince Harry and his bride Meghan Markle kissed amid loud cheering from the crowd that was present out St George's. The Queen will be hosting a reception for the newlyweds later in the evening today at Windsor Castle.