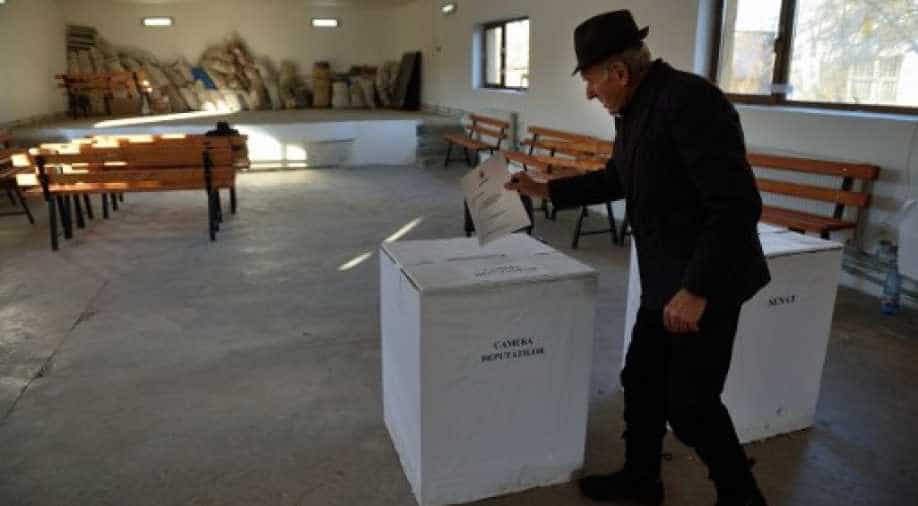 The exit polls Social Democrats 45 per cent ahead of its rivals. (In photo: A man casts his ballot at a polling station in the village of Iepuresti, Romania, December 11, 2016. ) Photograph:( AFP )

Romania's left staged an emphatic comeback in parliamentary elections Sunday, exit polls indicated, a year after a deadly nightclub fire forced them from office in the EU`s second-poorest country.

Mass protests after the fire on October 30, 2015 that claimed 64 lives -- and which was blamed on corruption -- forced premier Victor Ponta and his Social Democrats (PSD) to resign.

But exit polls on Sunday, 13 months later, put the PSD well ahead its rivals on around 45 percent of the vote, even better than expected.

The rival centre-right National Liberal Party (PNL) trailed on around 21 percent, while their allies the Save Romania Union (USR), newly created by a mathematician-turned-activist, was on nine percent.

It remains to be seen if the left can form a majority government, however -- much will depend on which of the smaller parties make it into parliament -- and who might be prime minister.

Official results weren't due before Monday.

Romania has been run since Ponta's departure by a caretaker government under technocrat Prime Minister Dacian Ciolos, 47, a former European commissioner.

The PNL and the USR have said they would support Ciolos staying on. He is happy to do so but wants to remain an independent, vowing continued budgetary discipline.

But the PSD wants to install instead party head Liviu Dragnea, 54, as premier.

However, Dragnea is serving a suspended sentence for electoral fraud, which legally bars him from office, while President Klaus Iohannis, 57, has refused to appoint anyone with legal problems as premier.

This would also exclude a comeback by Ponta, 44, currently on trial -- in fact he was already in the dock as prime minister -- for alleged tax evasion and money laundering, charges he denies.The inferno inside the Colectiv club was blamed on bent officials turning a blind eye to a lack of fire precautions. Poor medical care exacerbated the death toll.

For many Romanians it was the final straw, and the tragedy prompted a push to clean Romania up.

The National Anti-Corruption Directorate (DNA) has been highly active and visible, bringing ministers, senators, lawmakers and other public officials to justice.

A recent survey suggested that 95 percent of Romanians want tackling corruption to be a priority for the next government.

But there are worries this will not happen if the PSD returns to power.

"As a result, should a left-led coalition come to power, it will try to slow down this campaign."But the PSD enjoys strong support among older Romanians and in rural areas of the southeastern European nation of 20 million people.

However, 27 years after the summary execution of dictator Nicolae Ceausescu and the end of Communism, voter apathy is rife, with turnout forecast to be barely 40 percent.

Both sides, while trading insults and generally avoiding serious political discussion during the campaign, have pledged spectacular hikes in wages and pensions as well as tax cuts.

Such promises, however unaffordable, go down well in a nation where more than half of rural households have no running water and one in four people lives in poverty. Three million people have emigrated.

At the same time, however, the nationalist and anti-EU rhetoric seen in other countries in the region like Hungary and Poland has been largely, if not entirely, absent.

"Our Romania is completely destroyed. We can`t live here any more. There are no jobs, people are going abroad," Marin Oana, a voter in the poor southern village of Singureni, told AFP.

"I hope that (the politicians) grasp what the problems are in our society and invest in health care and education," said Denisa Grajdan, another voter in the same village.