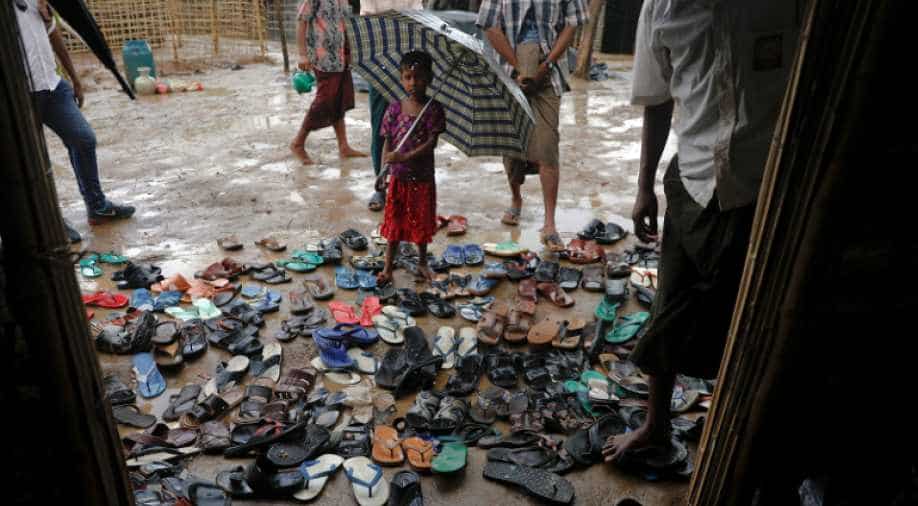 A girl holds an umbrella as Rohingya refugees arrive for a Friday prayer at a mosque in a camp for those who recently fled from Myanmar near Cox's Bazar, Bangladesh on October 6. Photograph:( AFP )

Rohingya militants whose attacks triggered an army crackdown in Myanmar's Rakhine state unleashing a huge wave of refugees said Saturday their one-month ceasefire would end in two days, but added they were open to peace if the government reciprocated.

In a statement released through its Twitter account, the Arakan Rohingya Salvation Army (ARSA) said its unilateral truce would end at midnight on October 9.

"If at any stage, the Burmese government is inclined to peace, then ARSA will welcome that inclination and reciprocate," it said, using the former name for Myanmar.

It did not include any direct threats of new violence.

The armed group tipped northern Rakhine into crisis when it ambushed police posts on August 25.

The army's reprisal has been so sweeping and savage that the UN says it likely amounts to ethnic cleansing of the Muslim minority, who have faced decades of persecution.

More than half a million Rohingya have fled into Bangladesh in six weeks, an exodus that has spiralled into one of the world's most urgent refugee crises.

In its statement, ARSA said it had helped provide "safe passage" to refugees fleeing to Bangladesh.

While the worst of the bloodshed appears to have abated in recent weeks, tens of thousands of Rohingya continue to stream over to Bangladesh, passing through a violence-scarred region where hundreds of villages have been reduced to smouldering ash.

Rohingya refugees and rights groups have accused the army of setting the fires with the help of Buddhist vigilante mobs.

But the military has denied the charge, instead accusing militants of razing their own homes to drum up global support.

Myanmar authorities have cut off access to the conflict zone, making it difficult to verify claims over who is driving the communal bloodshed that has intensified already bitter ethnic hatreds in Myanmar.

Aid groups have also been unable to reach vulnerable communities of Muslim Rohingya still living in the region, where tensions with Rakhine Buddhist neighbours are sky-high.

It is difficult to measure the fighting capacity of ARSA, a shadowy, poorly-armed group that claims to defend the Rohingya's political rights.

In the squalid refugee settlements sprouting up in Bangladesh, alleged ARSA recruiters have told AFP that they have enlisted hundreds who are willing to go back to Myanmar to fight.

Those claims could not be independently verified.

The Rohingya have faced decades of systematic repression in mainly Buddhist Myanmar, with many relegated to apartheid-like restrictions that analysts have long warned could breed extremism.

The government denies the existence of the Rohingya ethnicity, instead describing them as "Bengali" interlopers.

The view is widely shared by the Buddhist majority, who have shown little sympathy for the Rohingya, lavishing unexpected support on an army that once ruled the country with an iron fist.