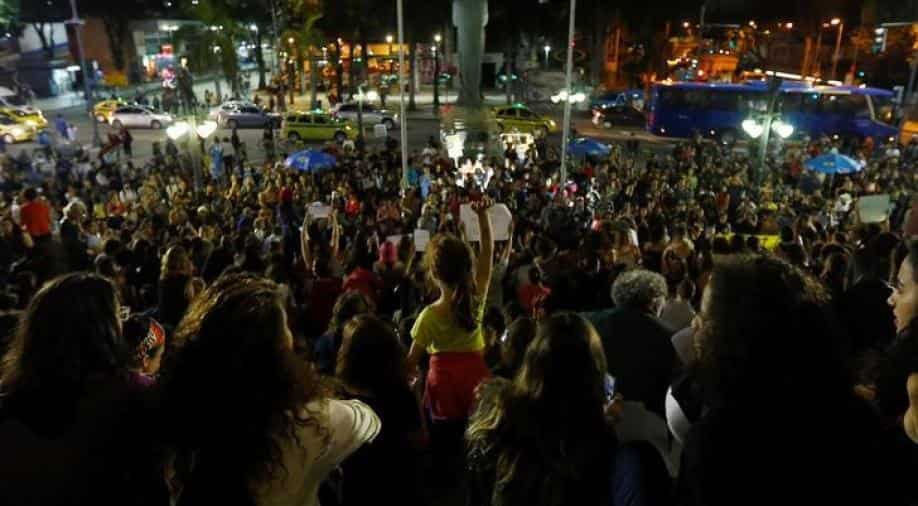 Demonstrators attend a protest against rape and violence against women in Rio de Janeiro Photograph:(Reuters)
Follow Us

Rio de Janeiro police swarmed two slums on Sunday searching for suspects in the alleged gang rape of a 16-year-old Brazilian girl who siad more than 30 men assaulted her, a case that shocked the nation set to host the Olympics in August.

More than 70 Officers  used helicoptors,armored vehicles and dogs to enter the slums, but there was no word if the suspects had been captured in the operation.

In the five days since a video of the rape was posted by an alleged perpetrator on Twitter and set off a wave of outrage, police have brought in five people for questioning and made no arrests.

Police said there are indications the gang rape occured on May 21, but they could not confirm how many took part.

Over the weekend, women and men marched in several cities to demand justice and decry sexism in Brazilian culture. A woman who sits on the Supreme Court lashed out at a pervasive macho culture that permits such barbaric acts.

" Each and every woman is a victim," Justice Carmen Lucia said in a written statement." Our bodies are tormented, our souls are trashed. That is what these criminals think and do, and they must be quickly held accountable."

The case added to the concerns about security in Rio and the political breakdown in Brazil as the city and the country prepare for South America's first Olympics starting August 5.

?rime has fallen in recent years, but there has been an increase in homicides in recent months as Rio's police department had its budget slashed during an economic downturn.

The country's elected President, Dilma Rousseff, has been suspended on allegations she broke budget laws, and her impeachment trials in the Senate will likely play out as the Games are held.

In addition, an outbreak of the Zika virus has prompted health warnings and led top global health experts to advise the Games be postponed or moved.

The reported rape came to light in a video of the nude, semi-conscious youth, with a few men brazenly insulting the girl, showing their faces and, one man heard saying:" More than  30 impregnated her!" The Twitter account where the video had been posted has been suspended.

Both, Rousseff, the first woman to be elected President in Brazil and interim President Michel temer condemned the act.

In an interview with Rio's O Globo newspaper, the alleged victim said she wanted  to  see justice done so that no other person would have to go through the brutal assault like the one she said she suffered.

" Today, I feel like a piece of trash, she told the newspaper." I hope that no other person ever feels this way."

Late on Sunday, the police siad in an emailed statement tehy removed the original lead investigator fromt he case.

That was in response to a formal request made by the alleged victim's lawyer, Eloisa Samy, to have investigator Alessandro Thiers taken off the case because she said he made the girl feel uncomfortable during questioning.

Samy told TV Globo in an interview that Thiers asked the girl if she participated in group sex parties.

Samy was not immidiately available to provide further details.