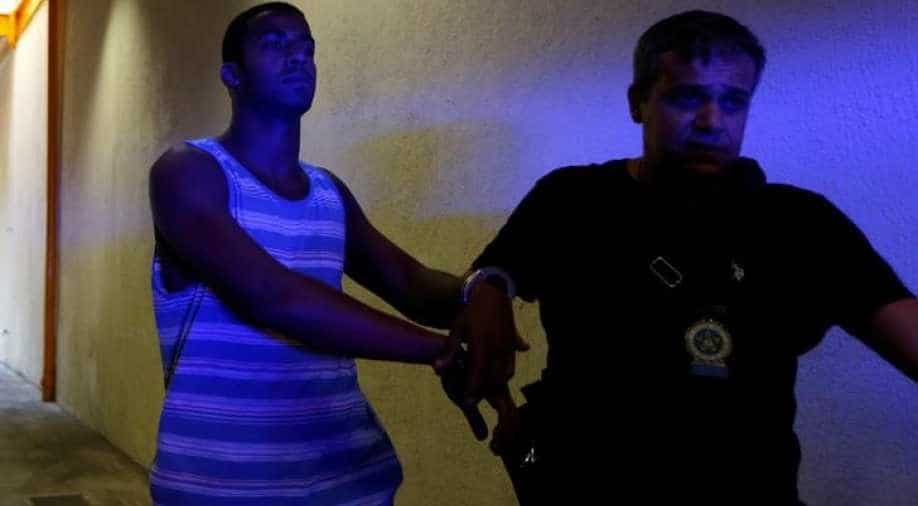 io de Souza, 22, suspected of being involved in the gang rape of a teenage girl, is escorted at the Police Station for crimes against minors in Rio de Janeiro. Photograph:(Reuters)
Follow Us

Rio de Janeiro police said on Monday that they were certain a 16-year-old girl was gang raped earlier this month, but added that it will be hard to prove that she was assaulted by more than 30 men, as alleged by her.

Two suspects in the case, which came to light after a video of the May 21 incident was posted to Twitter almost a week ago, shocking Brazilians, were placed in custody on Monday, authorities said. Arrest warrants are pending for four others.

In the clip, the semi-conscious naked girl is seen on a bed as men hurl insults and boast that 30 people had raped her. At one point, a man is seen touching her genitals.

"I am convinced there was a rape, it's right there in the video, when the guy touched the girl," lead investigator Cristiana Bento said in a news conference.

"The rape is proven," Bento said. "What I want to do now is verify the extent of this rape and how many people took part."

Her remark was the first time police have definitively stated the girl, who has not been identified, was raped. Previously, they had said there were all indications that a rape had occurred but that they needed more proof.

Authorities said a medical exam of the victim was only performed five days after the incident, hindering their ability to gather physical evidence that would lead to additional suspects and arrests.

The case has sparked a debate over sexism and violence in Brazil and raised security concerns ahead of Rio's hosting of the Summer Olympics in August. Crime has fallen in recent years in Rio, though there has been a recent increase in homicides.

The video, which was posted by one of the suspects, was widely shared across social media, prompting widespread outrage and igniting protests in several cities that continued Monday.

Some people, however, have focused their blame on the girl, with Bento noting that "she is being victimized by people judging her because she may have dressed in a certain way."

Protesters chanted "there was no rape" and held placards stating the same thing during a small demonstration at a bus stop near the western Rio slum where the girl said the gang rape occurred.

The O Globo newspaper posted on its website an audio sent via the Whatsapp messaging service in which an alleged member of the drug gang that controls the slum is heard ordering residents to attend the demonstration.

Bento, the investigator, said she is certain drug gang members were involved in raping the girl. She noted that police have an arrest warrant for Sergio Silva, the local head of the Red Command gang in the slum.

The girl at the center of the case is now under state protection. She and her family intend to leave Rio, officials said.

Brazil's Justice Minister Alexandre Moraes, visiting Rio for a meeting about Olympic security, said he would put the girl and her family in the federal government's witness protection program, should they want it.