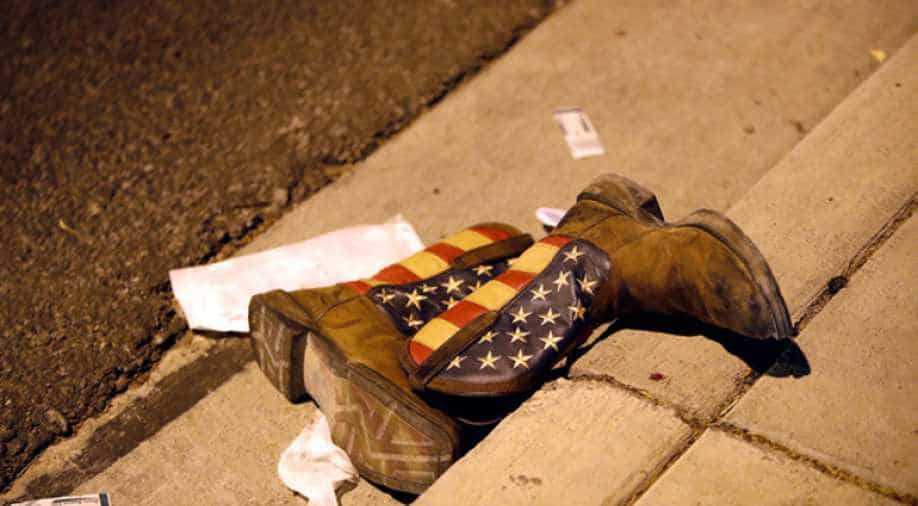 The gunman who fired on Las Vegas concertgoers from more than 1,000 feet away on Sunday may have used fully automatic weapons. Photograph:( Reuters )

A US law enforcement official, speaking on condition of anonymity, told Reuters authorities to believe 64-year-old Stephen Paddock had at least two such weapons when he fired from his 32nd-floor hotel room, killing at least 59 people and injuring more than 500

The gunman who fired on Las Vegas concert goers from more than 1,000 feet away on Sunday may have used fully automatic weapons - or guns legally modified to act like them -- that allowed him to spray bullets into the crowd of 22,000 people.

A US law enforcement official, speaking on condition of anonymity, told Reuters authorities to believe 64-year-old Stephen Paddock had at least two such weapons when he fired from his 32nd-floor hotel room, killing at least 59 people and injuring more than 500.

The rat-a-tat sound of the Las Vegas shooter's gunfire prompted police at the scene to report the gunman was using an "automatic" weapon - a term often used to describe a fully automatic gun that can fire as many rounds as its magazine, drum or belt holds by pulling and holding the trigger.

Those weapons have been largely outlawed for three decades, though Paddock could also have used legal or illegal means to alter semi-automatic rifles, which fire around every time the trigger is pulled.

"From the audio, that is not someone who has a traditional semi-automatic rifle firing it in its normal condition," said David Chipman, a former Bureau of Alcohol, Tobacco, Firearms and Explosives agent who advises the gun control group Americans for Responsible Solutions. "Either it's a machine gun or it's been modified. I don't believe a human can do that with his finger."

Police said they recovered a total of 42 weapons belonging to Paddock, including 23 from the hotel room and 19 at his home in Mesquite, a small desert town about an hour from Las Vegas.

It was not clear when or how Paddock obtained the guns.

Chris Sullivan, an owner of the Guns & Guitars shop near Paddock's home in Mesquite, Nevada, confirmed Paddock had legally purchased firearms from the store but did not offer more detail.

The shooting has prompted renewed calls from Democrats for tighter gun laws, though it is unlikely the Republican-controlled Congress will take up such measures.

In 1986, Congress barred civilians from buying or selling fully automatic weapons made after that date, though individuals can legally possess older weapons after passing a background check and obtaining a special permit.

There are about 176,000 pre-1986 machine guns registered with the US government that can be legally transferred, and they typically cost tens of thousands of dollars.

But there are also less expensive legal products that can allow semi-automatic rifles such as the AR-15, which are much more widely available, to fire hundreds of rounds per minute.

A "bump stock," for example, replaces a semi-automatic rifle's stock, which rests against the shoulder to provide stability and absorb recoil.

The bump-stock causes the gun's recoil to press against the shooter's finger after each shot, firing rounds much more quickly than possible by pulling it manually.

The website for one such product, Slide Fire, shows several videos in which shooters launch multiple rounds per second in bursts that sound almost indistinguishable from automatic fire. Reviewers have reported that the product permits a shooter to go through hundreds of rounds every minute.

Such devices are not outlawed because the trigger is still pulled for each round, even though the rate is faster than possible using only one's finger.

"There's very little difference between a souped-up semi-automatic and a fully automatic," said Mike McLively, a policy expert with Americans for Responsible Solutions.

Paddock could also have illegally converted semi-automatic rifles into fully automatic guns, a process made easier by the presence of guides uploaded to the internet.

Nevada law lets residents own machine guns if they are permitted under federal law. The state does not require licenses, registration or a waiting period for firearms, including semi-automatic rifles.