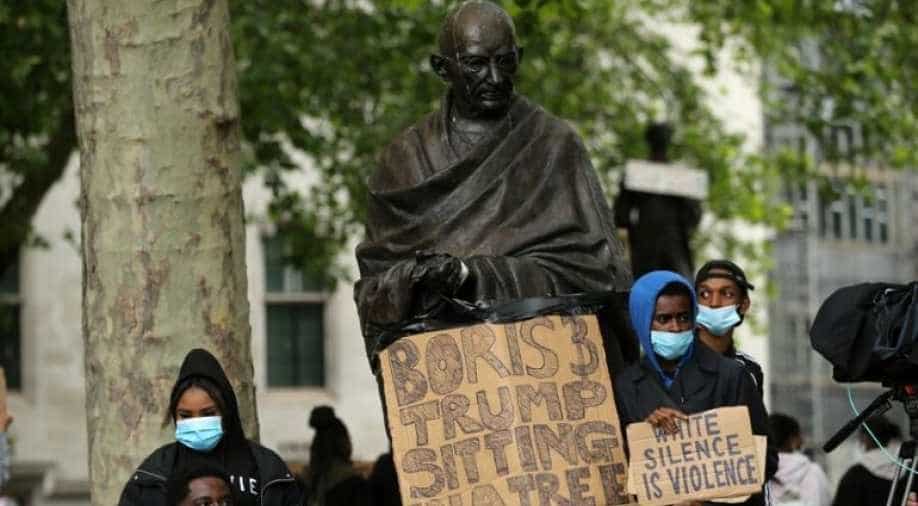 Protesters stand with placards in front of the statue of India's independence leader Mahatma Gandhi in Parliament Square, central London after a demonstration outside the US Embassy, on June 7, 2020 Photograph:( AFP )

Caught in the whirlwind are the British, responsible for colonising a big chunk of the world almost a century ago

As protests against systemic racism soar across the world, people are changing the way they look at history, with calls for a revisionist lens in narrating historical events, especially involving minorities and the historically marginalised.

Caught in the whirlwind are the British, responsible for colonising a big chunk of the world almost a century ago.

In the last couple of days, thousands of people have come out on the streets to protest against  imperial leaders, slave traders, and wartime heroes.

From Winston Churchill to Robert Clive, people who were once called the greatest britons are now being called racists.

A lot of statues have been vandalised across the country to boycott the imperialist history. Many have been burnt, and then thrown into the nearest waterbody.

The latest statue to face the heat is that of Mahatma Gandhi’s, with protesting demanding removal of his statue from Leicester. According to naysayers, Gandhi was a fascist, racist, sexual predator.

An online petition demanding the statue's removal has received over 5,000 signatures. The petition claims that Gandhi  used words like “uncivilised”, “savages”, and “dirty” to refer to Africans.

How have authorities reacted to this demand?

Some experts have called the demand absurd. Claudia Webbe, the parliamentarian from Leicester East -  said the petition is a “massive distraction” from the Black Lives Matter movement.

Webbe further claimed that the Black community does not want to deface the symbol of change while drawing parallels between Gandhi's peaceful protests and the BLM movement. Webbe referred to both as “forces for change”.

Protests against racism snowballed into clashes across the country over the weekend, with two sets of demonstrators taking to the streets. While one sided chanted anti-racism slogans, the other screamed racial slurs.

However, the two sides clashed at the iconic Trafalgar Square, which required police intervention, who were also attacked in the process. Over 15 people were injured owing to this, and at least five people have been booked for assaulting police officers.

Britain's prime minister Boris Johnson condemned the incident. He said that those indulging in violence would have to face the law.

“What we can't accept is people hijacking peaceful demonstrations and turning them into very ugly attacks on the police or on public monuments, we can't accept that and people who do that will feel the full force of the law”, said the British PM.