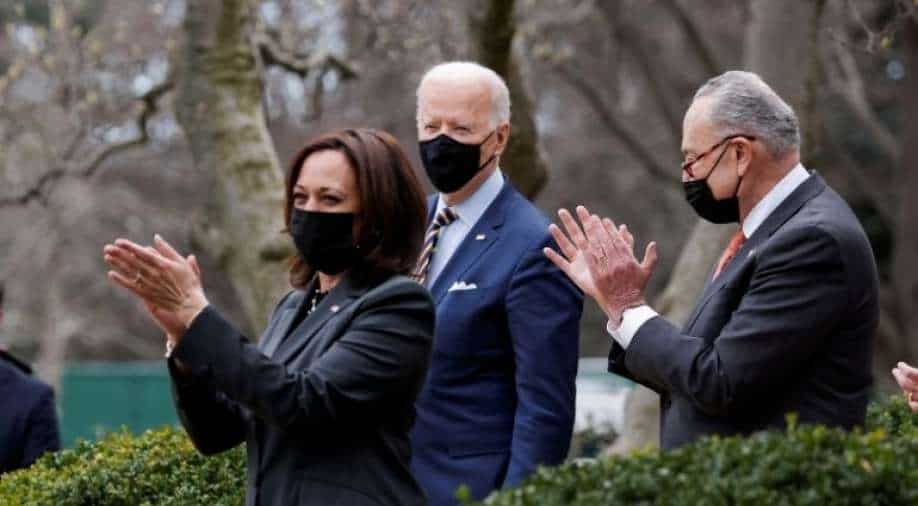 US President Joe Biden is applauded by Vice President Kamala Harris and Senate Majority Leader Chuck Schumer (D-NY) as he arrives to speak about the $1.9 trillion "American Rescue Plan Act" during an event to celebrate the legislation in the Rose Garden a Photograph:( AFP )

With a promise of "shots in arms and money in pockets," President Joe Biden on Monday kicked off a week of promotion and travel for the $1.9 trillion pandemic relief bill he signed into law last week to help the country move past the COVID-19 pandemic.

Biden and other advocates including Vice President Kamala Harris and first lady Jill Biden are being deployed to various states and to television as part of what the White House is calling the "Help Is Here Tour."

The package, one of the largest economic stimulus measures in U.S. history, provides $1,400 direct payments to most Americans, $350 billion in aid to state and local governments, an expansion of the child tax credit and increased funding for vaccine distribution.

"Help is here, and hope is here, in real and tangible ways," Biden said in remarks from the White House.

The legislation was Biden`s first legislative priority on taking office in January. His fellow Democrats used narrow majorities in the House of Representatives and Senate to pass a large measure of what Biden originally proposed without Republican support.

The Democratic president said his administration would reach two important goals over the next 10 days: 100 million coronavirus shots in people`s arms and 100 million checks in people`s pockets or bank accounts.

"Shots in arms and money in pockets. That`s important. The American Rescue Plan is already doing what it was designed to do: make a difference in people`s everyday lives. And we`re just getting started," Biden added.

The White House has said it does not believe former President Barack Obama`s administration, in which Biden served as vice president, did enough to promote its more than $800 billion 2009 economic rescue program. Democrats went on to lose control of the House to Republicans the next year.

Taking their case directly to the people, Harris traveled to Las Vegas on Monday, while Biden goes to Pennsylvania on Tuesday and Atlanta on Friday. He will also do an interview on Wednesday on ABC`s "Good Morning America" program.

"We want to avoid a situation where folks are unaware of what they`re entitled to and then this moment passes and they don`t get the full relief," the vice president told reporters in Las Vegas.

Democrats regard the bill as good policy and good politics. Opinion polls show majorities supporting efforts to shore up the coronavirus vaccination campaign, prepare schools to reopen and ease poverty after a year-long pandemic that has killed more than 535,000 Americans and put millions of people out of work.

Republicans, who broadly supported coronavirus relief early in the crisis when Republican Donald Trump was president, have called the latest measure an overpriced collection of pet projects unrelated to the pandemic.

Harris said she visited Nevada because of the disproportionate impact the pandemic has had on the state`s hospitality industry. Speaking with workers and labor unions about the legislation`s benefits, she urged people to file their taxes so they can receive such relief faster.

She will visit Colorado on Tuesday. Both there and in Nevada, Democrats will be defending U.S. Senate seats in elections next year that could be critical in helping the party maintain narrow control of that chamber.