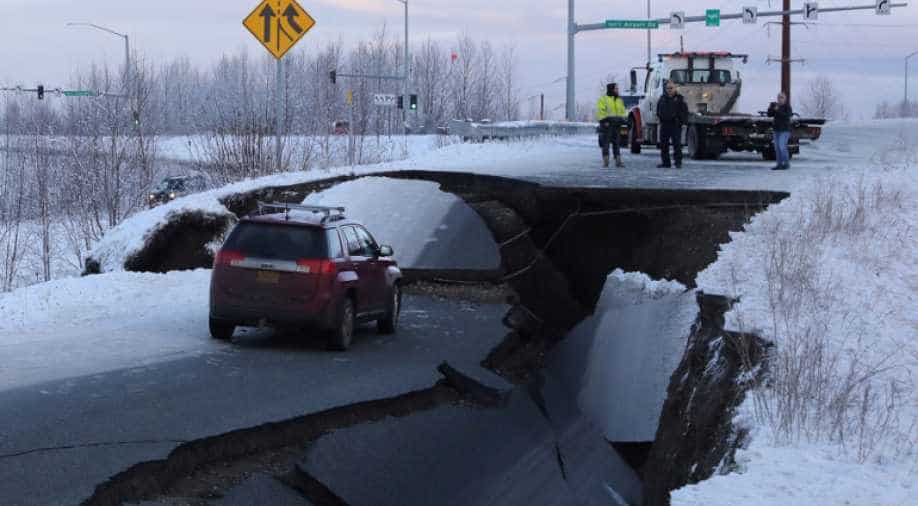 The 7.0 magnitude quake struck about 8 miles (13g km) north of Anchorage, a city of 300,000 residents accounting for about 40 per cent of Alaska`s population. The temblor was registered at a depth of 26.7 miles (43 km) beneath the surface, the US Geological Survey said.

A powerful earthquake shook southern Alaska on Friday morning, buckling roads, disrupting traffic and knocking television stations off the air in Anchorage, the state`s largest city, but there were no immediate reports of injuries.

The 7.0 magnitude quake struck about 8 miles (13g km) north of Anchorage, a city of 300,000 residents accounting for about 40 per cent of Alaska`s population. The temblor was registered at a depth of 26.7 miles (43 km) beneath the surface, the US Geological Survey said.

The quake, followed by numerous aftershocks, produced strong shaking within a 30-mile (50 km) radius of its epicentre, with ground movement felt as far away as Fairbanks, about 350 miles to the north, the USGS reported.

"Thought the house was going to come apart," Anchorage-based climatologist Brian Brettschneider wrote on Twitter, posting a picture of his kitchen floor scattered with items that had fallen from cupboards.

A tsunami warning was issued for Cook Inlet, linking Anchorage with the Gulf of Alaska, but was later cancelled.

The Trans Alaska Pipeline that carries North Slope crude 800 miles (1,300 km) to the marine terminal at Valdez was shut down as a precaution, but no damage to the system was immediately detected, said a spokeswoman for the operator, Aleyska Pipeline Service Co.

Infrastructure in and around Anchorage took a major hit, police said on Twitter, with some homes and other buildings heavily damaged and many roads and bridges forced closed.

Rush-hour traffic in Anchorage came to a standstill and jammed up heading out of town after the quake struck at around 8:30 a.m.
Disaster declarations were issued by Governor Bill Walker and Anchorage Mayor Ethan Berkowitz.

“Scary day for Alaska. We have been through earthquakes in the past. This one was different. This was very, very scary, damage that we don’t fully understand,” Walker said in a video statement from outside a National Guard armoury command centre.

Walker said he had been in contact with the White House, which promised emergency assistance from the federal government.

A team from the Federal Emergency Management Agency was on its way to the quake zone, and damage assessments were under way, Senator Lisa Murkowski of Alaska said on Fox News Channel. "But we know that a tragedy of this magnitude is going to require outside resources," she said.

Strong earthquakes are not uncommon in seismically active Alaska, but they tend to occur in remote, sparsely populated regions where there is little or no damage.

Alaska has recorded earthquakes with magnitudes ranging from 7 to 8 at least once a year on average since 1900, according to the state government website. Southern Alaska was hit by a devastating 9.2 tremor in 1964, the second most powerful earthquake on record.

Video on social media showed various images of damage from the quake, including supermarket floors strewn with items that tumbled from shelves and television station KTVA`s studio in shambles.

A photo posted by a reporter at KTVA showed a deserted newsroom, with the ceiling partially collapsed and debris scattered throughout. CNN reported that television station KTUU, an NBC affiliate, also was knocked off the air.

KTUU`s website featured a photo of a snow-covered highway that had buckled, with a car sitting between two deep fissures crossing the highway.

The Ted Stevens Anchorage International Airport remained open, but arrivals and departure ramps were closed and there were reports of road damage, the airport said on Twitter.

The city`s schools were evacuated and parents were notified to pick up their children.