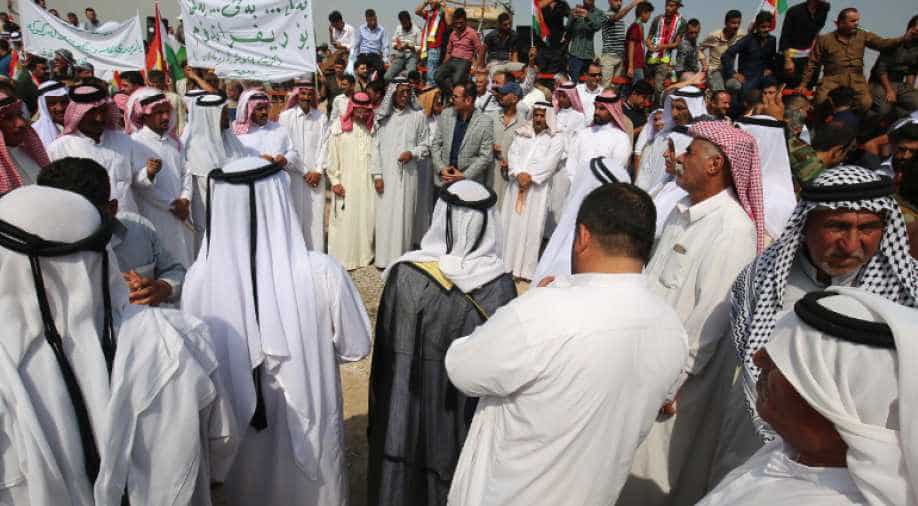 Iraqis gather in support of the upcoming independence referendum and against the parliament's sacking of the governor of the oil-rich state the previous week during a rally in Kirkuk. Photograph:( AFP )

Police deployed overnight in the northern Iraqi oil city of Kirkuk to prevent any outbreak of ethnic violence ahead of a referendum on Kurdish independence, local residents said.

The Kurdish region plans to go ahead with the Sept. 25 vote despite Baghdad's warning it is "playing with fire" and U.S. declarations it could undermine the fight against Islamic State forces. The referendum, though, could raise particular tensions in Kirkuk, where Kurds vie with Turkmen and Arabs for power.

Kurdish security and the city police erected checkpoints across the city after a Kurd was killed in a clash with the guards of a Turkmen political party office in the city.

Two other Kurds and one Turkmen security guard were also wounded in the clash that broke out when a Kurdish convoy celebrating the referendum, carrying Kurdish flags, drove by the Turkmen party office, security sources said. The Kurdish dead and wounded were among those celebrating, they said.

Turkey, which has put troops and tanks on exercises close to the border with the Kurdish region, has long seen itself as the protector of the Turkmen minority. When Iraqi Kurds raised their flag over the city in April, Turkish President Tayyip Erdogan declared that Kirkuk could not be a Kurdish city.

Turkish soldiers, scheduled for manoeuvres until the day after the referendum is due, could be seen digging in at a point about two km (a mile) from the frontier.

Turkey, however, has cultivated close political and business relations with the Kurdish regional government and would be reluctant to disrupt especially oil commerce by any intervention.

Tensions rose after the Kurdish-led provincial council voted this month to include the city in the referendum despite the fact that it lies outside the official boundaries of the Kurdistan region.

Kurdish peshmerga fighters seized Kirkuk and other disputed territories when the Iraqi army collapsed in the face of Islamic State in 2014, preventing its oilfields from falling into the militants' hands. In recent months the militants have been driven back across Iraq, but remain dug in close to Kirkuk.

Iraqi armed forces announced on Tuesday the start of an attack to dislodge Islamic State from the town of Ana, as they push westward toward al-Qaim, the border post with Syria.

Iranian-backed Iraqi Shi'ite militias, highlighting the broader perils emanating from the vote, have threatened to dislodge the Kurdish peshmerga forces from Kirkuk should the Kurds persist in holding the vote.

The Kurdish authorities are showing no sign of bowing despite intense international pressure and regional appeals to call off the vote which Baghdad says is unconstitutional and a prelude to breaking up the country.

Iran and Turkey fear contagion for their own Kurdish populations. Turkey has been fighting a Kurdish insurgency in its south-east since 1984

Iraqi Kurdish President Massoud Barzani said late on Monday he would proceed with the vote in the absence of any guarantee by the international community that Baghdad would hold talks on Kurdish independence,

“Referendum and dialogue are means toward independence,” Barzani told visiting defence minister Michael Fallon, during a meeting in Erbil, the seat of the Kurdish government.