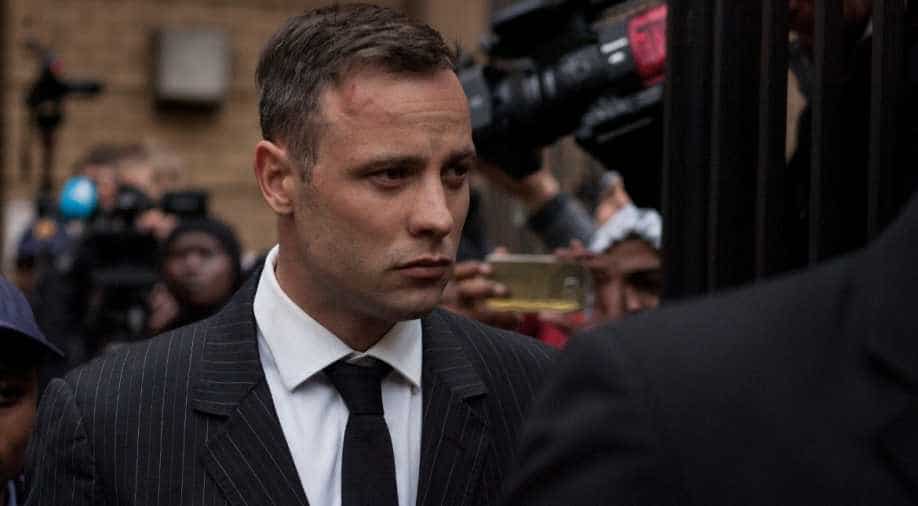 Paralympic runner, Oscar Pistorius, who faces trial for murdering his girlfriend stood on is stumps in the court for five minutes. Photograph:( Getty )

Oscar Pistorius shuffled through a Pretoria court without his prosthetic legs on Wednesday to show how vulnerable he is as the Paralympian seeks to avoid prison for murdering his girlfriend Reeva Steenkamp.

The 29-year-old faces a minimum 15-year jail term for the Valentine's Day killing in 2013 in a case that has attracted worldwide interest and divided South Africa. He will be sentenced on July 6.

Pistorius has always said he mistook Steenkamp for an intruder when he fired four shots through a locked toilet door in his Pretoria home, killing her almost instantly.

During his closing arguments, defense lawyer Barry Roux asked the gold medalist, known as the "Blade Runner" for his carbon-fibre prosthetics, to walk on his stumps to show the difficulty he faced dealing with the threat of an intruder.

The lower part of his legs were amputated when he was a baby.

His body shaking with emotion, Pistorius removed his prosthetics and stood on his stumps for about five minutes in front of the court television camera, wiping tears with a tissue.

"The accused was vulnerable because of his disability," Roux said. "His failure to conduct a rational thought process does not negate his vulnerability."

The defense says Pistorius did not deliberately kill model and law graduate Steenkamp and was "a broken man", calling for a non-custodial sentence that includes community service.

A state prosecutor argued that Pistorius - who did not take the stand himself - had shown no remorse or told the court why he fired the shots, and asked the court jail the athlete for the prescribed minimum sentence of 15-years.

The athlete originally received a five-year sentence for a manslaughter conviction, that was upgraded to murder on appeal.

The original trial judge, Thokozile Masipa, who presided at the hearings at the Pretoria High Court, on Wednesday set July 6 as the date for the sentencing.

Roux asked the judge to consider that his client was vulnerable because of his disability and that the prescribed 15-year minimum sentence should give the court "unease".

"The fact is that a disabled person in jail has a more difficult time," Roux said.

The case has prompted a fierce debate in a country beset by high levels of violent crime against women and still dealing with the legacy of decades of apartheid race-based rule.

Roux said the publicity surrounding the case led to it being portrayed as an incident of gender-based violence, despite the facts showing it was not. Pistorius had now "become the face of gender violence", he said.

Shortly after Roux asked Pistorius to walk without his prosthetics, prosecutor Gerrie Nel requested that the judge allow photos to be shown of Steenkamp's bloodied head and torso. Masipa later granted the request and ruled that the photos be made available to the public upon request.

"There's a chasm between regret and remorse," Nel said. "Real remorse would have been the accused taking the court into his confidence, telling the court why I fired that shot, why I did what I did. We don't have that."

Earlier, Steenkamp's cousin Kim Martin, fought back tears saying she found it hard to cope with the killing and wondered why Pistorius had given a television interview rather than testify at the pre-sentencing hearings.

"I just think its very unfair to want to talk to the world about your version when you have the opportunity in court to do so, it's very hurtful, I can't understand why," she said.

Pistorius' hour-long interview with Britain's ITV is due to air next week.
(Reuters)