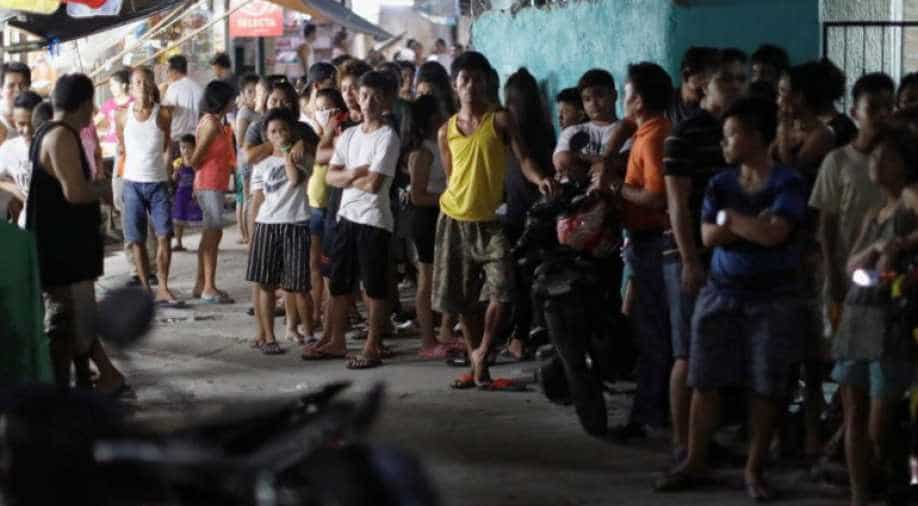 Metro Manila police chief Oscar Albayalde said the three policemen involved had been relieved of their duties and an investigation would be launched into the incident, which took place in the Caloocan district in the northwest of the capital.

The Philippines police came under pressure on Friday to explain the killing of a high-school student after the 17-year-old became one of at least 80 people shot dead this week in an escalation of President Rodrigo Duterte's ruthless war on drugs.

Television channels aired CCTV footage that showed Kian Loyd Delos Santos being carried by two men to the place where his body was later found, raising doubt about an official report that said he was shot because he fired at police officers first.

Witnesses told the ABS-CBN channel that the teenager did not have a firearm and police officers at the scene handed him a gun, asked him to fire the weapon and run.

National police chief Ronald dela Rosa said that if the Grade 11 student did not pose a threat, the officers who shot him on Thursday night would be held accountable.

"Just think about it, he is just a kid. If that happened to your sibling?" he said on GMA TV. "We will investigate it, I assure you."

Metro Manila police chief Oscar Albayalde said the three policemen involved had been relieved of their duties and an investigation would be launched into the incident, which took place in the Caloocan district in the northwest of the capital.

Police killed at least 13 people in Manila on the third night of a new push in Duterte's war on drugs and crime, taking the toll for one of the bloodiest weeks so far to 80, Reuters witnesses and media reported.

Earlier this week, 67 people were gunned down and more than 200 arrested in Manila and provinces adjoining the Philippines capital, in what police described as a "One-Time, Big-Time" push to curb drugs and street crimes.

The term has been used by police to describe a coordinated drive in crime-prone districts, usually slums or low-income neighbourhoods, often with additional officers.

The spike in killings drew condemnation from Vice President Leni Robredo, who belongs to a party opposed to Duterte.

Branding it "something to be outraged about", she has been a constant critic of the crackdown that has killed thousands of Filipinos and caused international alarm since Duterte took office over a year ago.

Several senators raised concerns on Friday over the rise in the number of deaths, calling for an impartial investigation.

"Killing the poor and powerless is not the solution to the drug problem when tons of methamphetamine are smuggled in," Senator Francis Pangilinan said in a statement.

An ally of the president, Senator Jose Victor Ejercito, said he was "worried that these intensified killings are being used by some rogue police officers, knowing that the president will protect them".

Police say there has been no instruction from higher authorities to step up their anti-drug operations and they are only doing their job.

Duterte indicated this week that the escalation had his blessing, saying it was good that 32 criminals had been killed in a province north of Manila and adding: "Let's kill another 32 every day. Maybe we can reduce what ails this country."

On Thursday, he said he would not just pardon police officers who killed drug offenders during the anti-narcotics campaign, but also promote them.

"I don't think they are simply acting based on the president’s endorsements," Duterte's spokesman, Ernesto Abella, told reporters. "It just so happens they are taking active steps in addressing the drug situation in Philippines."

Critics maintain that members of the Philippine National Police (PNP) are executing suspects and say it is likely they have a hand in thousands of unsolved murders of drug users by mysterious vigilantes. The PNP and government reject that.

Although the violence has been criticised by much of the international community, Filipinos largely support the campaign and domestic opposition to it has been muted.

"Again and again we hear people say it is safer ... they appreciate the fact that the Philippines is being made safe again," Abella said.