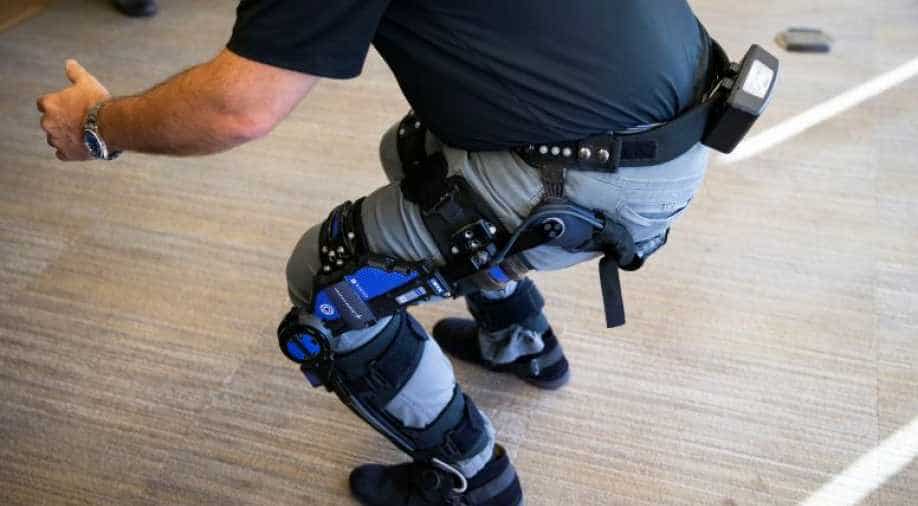 Keith Maxwell, Senior Product Manager of Exoskeleton Technologies at Lockheed Martin, demonstrates an Exoskeleton during a Exoskeleton demonstration and discussion, in Washington, US, November 29, 2018. Photograph:( Reuters )

Worn over a pair of pants, the battery-operated exoskeleton uses a suite of sensors, artificial intelligence and other technology to aid natural movements.

The US Army is investing millions of dollars in experimental exoskeleton technology to make soldiers stronger and more resilient, in what experts say is part of a broader push into advanced gear to equip a new generation of "super-soldiers."

The technology is being developed by Lockheed Martin Corp with a license from Canada-based B-TEMIA, which first developed the exoskeletons to help people with mobility difficulties stemming from medical ailments like multiple sclerosis and severe osteoarthritis.

Worn over a pair of pants, the battery-operated exoskeleton uses a suite of sensors, artificial intelligence and other technology to aid natural movements.

For the US military, the appeal of such technology is clear: Soldiers now deploy into war zones bogged down by heavy but critical gear like body armor, night-vision goggles and advanced radios. Altogether, that can weigh anywhere from 90 to 140 pounds (40-64 kg), when the recommended limit is just 50 pounds (23 kg).

"That means when people do show up to the fight, they're fatigued," said Paul Scharre at the Center for a New American Security (CNAS), who helped lead a series of studies on exoskeletons and other advanced gear.

"The fundamental challenge we're facing with infantry troops is they're carrying too much weight."

Lockheed Martin said on Thursday it won a $6.9 million award from the US Army Natick Soldier Research, Development and Engineering Center to research and develop the exoskeleton, called ONYX, under a two-year, sole-source agreement.

"You get to the fight fresh. You're not worn out," Maxwell said.

Maxwell, who demonstrated a prototype, said each exoskelelton was expected to cost in the tens of thousands of dollars.

The United States is not the only country looking at exoskeleton technology.

Samuel Bendett at the Center for Naval Analyses, a federally funded US research and development center, said Russia and China were also investing in exoskeleton technologies, "in parallel" to the US advances.

Russia, in particular, was working on several versions of exoskeletons, including one that it tested recently in Syria, Bendett said.

The CNAS analysis of the exoskeleton was part of a larger look by the Washington-based think tank at next-generation technologies that can aid soldiers, from better helmets to shield them from blast injuries to the introduction of robotic "teammates" to help resupply them in war zones.

UN defeats US demand to extend arms embargo on Iran