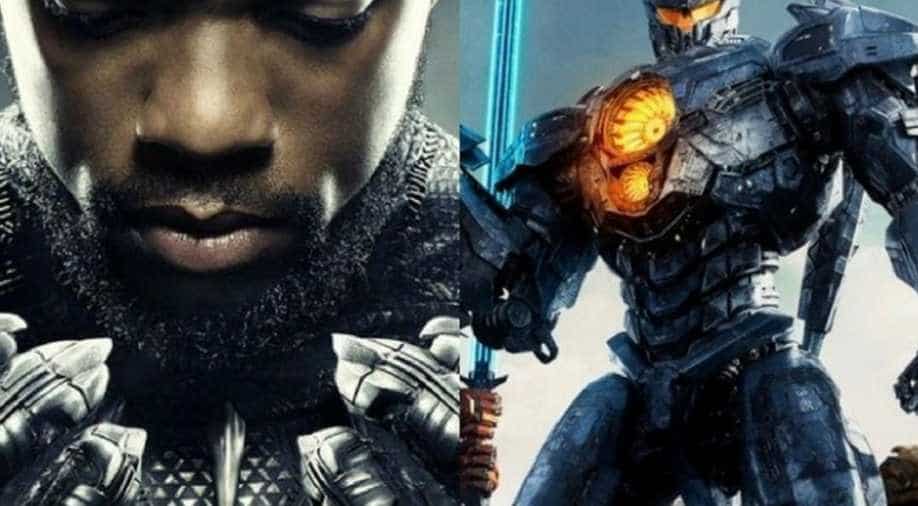 Black Panther's dream run at the box office has been disrupted by Pacific Rim Uprising. Photograph:( Others )

Universal and Legendary`s Pacific Rim Uprising landed a respectable $28 million opening weekend at 3,708 locations. The monster battle movie has garnered mixed critical response, with a current 46 percent on Rotten Tomatoes. Though it opened with a softer debut than Guillermo del Toro`s predecessor Pacific Rim, which saw $37 million in July 2013, the sequel was enough to dethrone Black Panther in the superhero tentpole`s sixth weekend.

Steven S. DeKnight co-wrote and directed Pacific Rim Uprising&nbspwith a reported $150 million budget. The original, which starred Idris Elba, Rinko Kikuchi, Charlie Day, Charlie Hunnam, and Robert Kazinsky, went on to gross $411 million at the worldwide box office, thanks to a strong international showing, especially in China, where it made $112 million compared to the U.S.` $101.8 million.

The sequel is set 10 years after the Battle of the Breach with a new generation of Jaeger pilots ready to combat the evolving Kaiju monsters and prevent humanity`s extinction. John Boyega plays Jake Pentecost, the son of Elba`s character Stacker Pentecost, who sacrificed his life in the first film. Scott Eastwood, Jing Tian, Cailee Spaeny, Kikuchi, Burn Gorman, Adria Arjona, and Day also star.
Still, in its sixth weekend, Black Panther&nbspcontinues to be a powerhouse, nabbing the No. 2 spot with $17 million at 3,370 sites. That number lands Black Panther&nbspone of the seven highest sixth weekends in history. To date, the Marvel film has taken in $631 million, making it the fifth-highest all-time domestic grosses ahead of The Avengers.

"It had to happen at some point, and Universal`s Pacific Rim Uprising now holds the distinction of being the film that took over `Black Panther`s` long-standing position as king of the weekend box office mountain," Paul Dergarabedian, a box office analyst at comScore, said. "The latest Disney superhero film has been an absolute marvel, holding onto the top spot for a whopping five weeks, while sprinting its way up the all-time charts and now stands as the fifth highest grossing film of all-time in North America and ranks twelfth globally after just 38 days in theatres.

Meanwhile, Roadside Attraction and Lionsgate`s faith-based I Can Only Imagine&nbspremains a force in its second weekend with $13 million from 2,253 sites. Based on the story behind the best-selling Christian song, "I Can Only Imagine" earned a surprisingly strong $17.1 million at the domestic box office, bringing its total up to $38 million.

Following I Can Only Imagine`s&nbspsuccess, biblical drama Paul, Apostle of Christ&nbspopened in line with estimates with $5 million at 1,473 sites over Palm Sunday weekend. The story follows James Faulkner as Saint Paul in his last days awaiting execution by Emperor Nero in Rome. Directed by Andrew Hyatt, the film also stars Jim Caviezel, Olivier Martinez, Joanne Whalley, and John Lynch.

Young adult romantic drama Midnight Sun&nbspstars Bella Thorne as a teen who has been sheltered at home since childhood due to a life-threatening sensitivity to sunlight. Steven Soderbergh`s psychological thriller "Unsane" sees Claire Foy as a troubled woman stalked by her ex. Joshua Leonard, Jay Pharoah, Juno Temple, Aimee Mullins, and Amy Irving round out the cast.

Rounding out the weekend, Wes Anderson`s Isle of Dogs&nbspopened with $1.5 million in limited release, with a screen average of over $58 thousand in 27 theatres. The stop-motion animated film boasts a star-studded ensemble voice cast that includes Bryan Cranston, Edward Norton, Bill Murray, Jeff Goldblum, Greta Gerwig, Frances McDormand, and Bob Balaban. Set in a dystopian futuristic Japan, dogs have been quarantined on a remote island due to a canine flu. A boy, Atari, ventures to the island to find his dog, Spots.