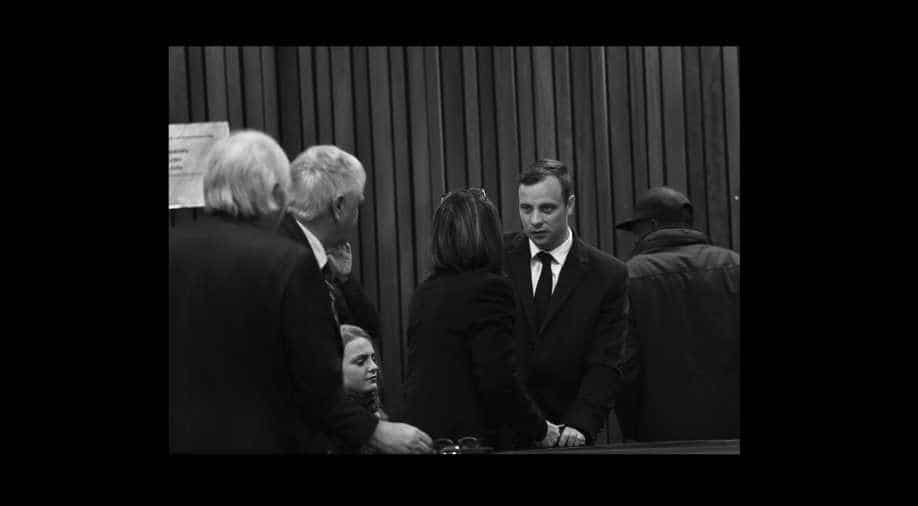 Follow Us
South African Paralympian Oscar Pistorius was sent back to prison on Wednesday after being given a six-year jail term for murdering his girlfriend Reeva Steenkamp at his home three years ago.

High Court judge Thokozile Masipa listed several mitigating factors for sentencing him to less than half the minimum 15-year term for murder, including the athlete's claim he believed he was shooting an intruder.

"He cannot be at peace. I'm of the view that a long term of imprisonment will not serve justice," Masipa said.

"He's a first offender. Considering the facts of this matter he's not likely to re-offend.

"The sentence that I impose on the accused... is six years' imprisonment."

Pistorius' lawyer Andrew Fawcett said he would not appeal the term.

Parole conditions vary in South Africa, but the double-amputee Olympic sprinter may be able to apply for parole after serving just three years behind bars.

Pistorius, 29, hugged his family before being taken out of the court and driven to the nearby Kgosi Mampuru II prison in Pretoria.

He was released from same jail last October after serving one year of a five-year term for culpable homicide -- the equivalent of manslaughter.

But an appeals court upgraded his conviction to murder in December.

Steenkamp's parents looked on quietly as the judge passed sentence.

"We let the law run its course, nothing will bring Reeva back," the family's lawyer Petrus de Bruyn told AFP afterwards.

Pistorius shot Steenkamp, a model and law graduate, in the early hours of Valentine's Day in 2013, saying he mistook her for a burglar when he fired four times through the door of his bedroom toilet.

His long legal battle may not yet be at an end, with the state yet to confirm whether it will appeal a sentence seen by many experts and activists as lenient.

"We are very disappointed from five years that we fought against, and now it is six, what is that?" Jacqui Mofokeng, spokeswoman of the ruling ANC party's women league, told AFP after the sentencing.

"It's an insult to the women of South Africa."

- 'Fallen hero' -
A challenge by the prosecution to the Supreme Court of Appeal would be another blow to Masipa, who issued the original culpable homicide verdict that was later overturned.

Many legal experts said they had expected a term of between 11 and 14 years.

He was then taken by car to prison, a correctional services official confirmed to AFP.

During his earlier jail term he was held in the hospital wing, separated from regular inmates.

"Thankfully, healing has already started, Mr and Mrs Steenkamp have stated they have forgiven the accused," the judge said in her ruling.

"The life of the accused shall also never be the same. He is a fallen hero who has lost his career and he is ruined financially."

At his sentencing hearing last month Pistorius, sobbing heavily, hobbled on his stumps across the courtroom to demonstrate his physical vulnerability.

His lawyers had argued he should not be returned to jail on account of his anxiety disorder and depression.

Pistorius, who pleaded not guilty at his trial in 2014, has always denied killing Steenkamp in a rage, saying he was trying to protect her.

The Supreme Court of Appeal in December ruled he was guilty of murder, irrespective of who he believed was behind the door, when he opened fire with a high-calibre pistol he kept under his bed.

The year before he killed Steenkamp, Pistorius became the first double-amputee to race at Olympic level when he appeared at the London 2012 games.

He told a recent television interview that he believed Steenkamp would want him to devote his life to charity rather than return to prison for killing her.

"I don't want to go back to jail," he said. "If I was afforded the opportunity of redemption, I would like to help the less fortunate."

"I would like to believe that if Reeva could look down upon me that she would want me to live that life."