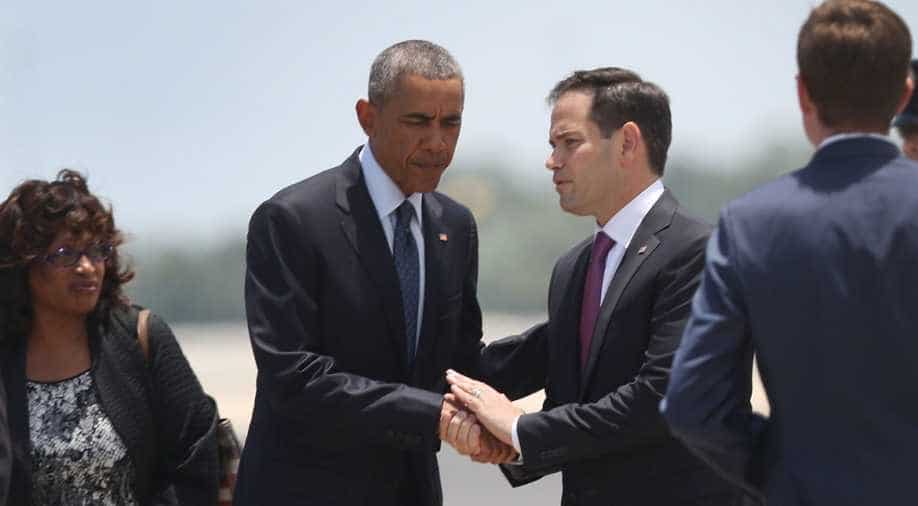 Obama added: 'Relatives of the victims don't care about the politics. And neither do I' Photograph:( Getty )

Follow Us
President Barack Obama travelled to grief-stricken Orlando today, meeting loved ones devastated by a shooting rampage and using his bully pulpit to demand that the Republican-controlled Congress pass gun control.

Four days after the worst mass shooting in US history, Obama made a solemn pilgrimage to meet staff at the Pulse nightclub, emergency responders and some of the dozens of families shattered by gunman Omar Mateen.

Forty-nine people were killed and 53 wounded when the 29-year-old Mateen -- a Muslim American of Afghan descent -- ran amok in a packed gay nightclub early Sunday, armed with a legally bought assault rifle.

Mateen -- who pledged allegiance to the leader of the Islamic State group during the attack -- was killed in a police raid.

After meeting the victims' families, Obama said "our hearts are broken too" and insisted the tone of the country's hyper-partisan debate on firearms "needs to change."

Relatives of the victims "don't care about the politics. And neither do I," he said.

The Republican-controlled Congress has steadfastly refused to pass any gun legislation, saying to do so would infringe on the constitutional rights of gun owners.

Frustrated Democrats took to the Senate floor on Wednesday to launch a procedural obstruction, known as a filibuster, to pressure Republicans to accept so-called "no-fly, no buy" legislation that would bar those on watch lists or no-fly lists from purchasing firearms.

The move was a success, and votes were set for next week.

- Can't catch every 'deranged person' -
Understanding of the shooting has been muddied by witnesses who say Mateen was a regular at the gay club and used gay dating apps. Investigators were looking into Mateen's social media activity for more clues.

Ron Johnson, the Republican chairman of the Senate Committee on Homeland Security, said in a letter to Facebook chief Mark Zuckerberg that his investigators had found Mateen apparently made a post sometime during the attack that he was pledging allegiance to the Islamic State group's leader, and "America and Russia stop bombing the Islamic state."

He also allegedly posted: "The real muslims will never accept the filthy ways of the west" and "In the next few days you will see attacks from the Islamic state in the usa."

"The motives of this killer may have been different than the mass shooters in Aurora or Newtown," Obama said, listing two in the litany of mass shootings that have marked his presidency.

"But the instruments of death were so similar. And now another 49 innocent people are dead. Another 53 are injured. Some are still fighting for their lives. Some will have wounds that will last a lifetime."

Obama insisted the military would tackle the Islamic State group, al-Qaeda and other extremist groups in their hideouts, and intelligence services would work to disrupt such networks.

But, he warned, the government could not catch every "deranged person."

"We can do something about the amount of damage that they do," he said.

"Unfortunately our politics have conspired to make it as easy as possible for a terrorist or just a disturbed individual like those in Aurora and Newtown to buy extraordinarily powerful weapons and they can do so legally."

- Rare bipartisanship -
The day was meant to be about unity.

In a rare symbolic show of bipartisanship, Obama arrived with Republican one-time presidential hopeful Marco Rubio and was greeted on the tarmac by Republican Florida governor Rick Scott and Vice President Joe Biden.

But any goodwill was blown apart when Senator John McCain said Obama -- his general election rival in 2008 -- was "directly responsible" for the massacre.

McCain later said he had meant to suggest that Obama's policies in the Middle East were to blame, not the president personally.

In response to the shooting, Republicans have called for tougher counterterrorism measures and for the Obama administration to do more to fight the Islamic State group.

The White House says coalition forces and allies are making gains against the group's strongholds in Syria, Iraq and Libya.

But Republican arguments were given credence by Obama's own CIA director John Brennan, who warned today that the group retains the ability to conduct attacks around the world.

"Unfortunately, despite all our progress against ISIL on the battlefield and in the financial realm, our efforts have not reduced the group's terrorism capability and global reach," he told US lawmakers at a hearing on Capitol Hill.
(AFP)