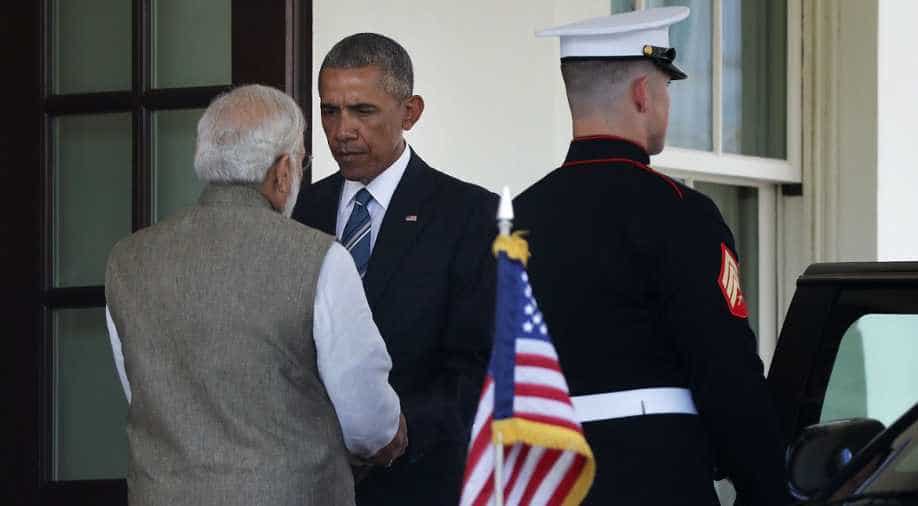 In the joint statement, the United States said it now recognized India as a "Major Defence Partner" and would work on technology sharing "to a level commensurate with that of its closest allies and partners". Photograph:( Getty )

India and the US welcomed preparations that could lead to the building of six nuclear reactors in India by US-based Westinghouse, in what would be the culmination of some 10 years of work to resolve civil-nuclear issues.

The joint statement said India and the US Export-Import Bank were working to complete a financing package for the project and that the Nuclear Power Corporation of India and Westinghouse had confirmed engineering and site design work would begin immediately.

It said Westinghouse and the Nuclear Power Corporation of India would work toward finalizing the contract by June 2017 - a year later than Westinghouse's chief executive Daniel Roderick said he had hoped for.

The text of a logistics agreement, which will allow the countries' militaries to use each other's land, air and naval bases, would be signed soon, a US official said.

Modi told an event organized by the US India Business Council that relations between India and the United States were "closer than ever". He said the planned reactor purchases would mark new era in nuclear and scientific cooperation.

Modi's address to a joint session of Congress will be a significant personal step. Although this has become a tradition for Indian prime ministers, he was once banned from the United States for his alleged involvement in 2002 Gujarat riots.

More than 1,000 people, mostly Muslims, were killed in sectarian riots in Gujarat in 2002 when Modi had just become the state's chief minister. Modi has denied any wrongdoing, and India's Supreme Court in 2010 ruled there was no case.

In the joint statement, the United States said it now recognized India as a "Major Defence Partner" and would work on technology sharing "to a level commensurate with that of its closest allies and partners".

Tensions between the United States and Pakistan, as well as regional concerns about China, have served as a backdrop to increased security cooperation.

Senator John McCain, chairman of the US Senate Armed Services Committee, said the address to Congress was "entirely appropriate" given the new partnership.

"There’s no doubt there are significant tensions and challenges in the region, which argues for closer coordination between our militaries," he said.

While Modi is generally popular with the US lawmakers, they criticize what they see as lingering unfriendliness to US firms and a stifling bureaucracy, in spite of Modi's pro-business image. They also question New Delhi's record on human rights.

Modi got a boost on Tuesday when Amazon Inc Chief Executive Jeff Bezos said his company will invest an additional $3 billion in India, increasing its committed investment in the country to over $5 billion.