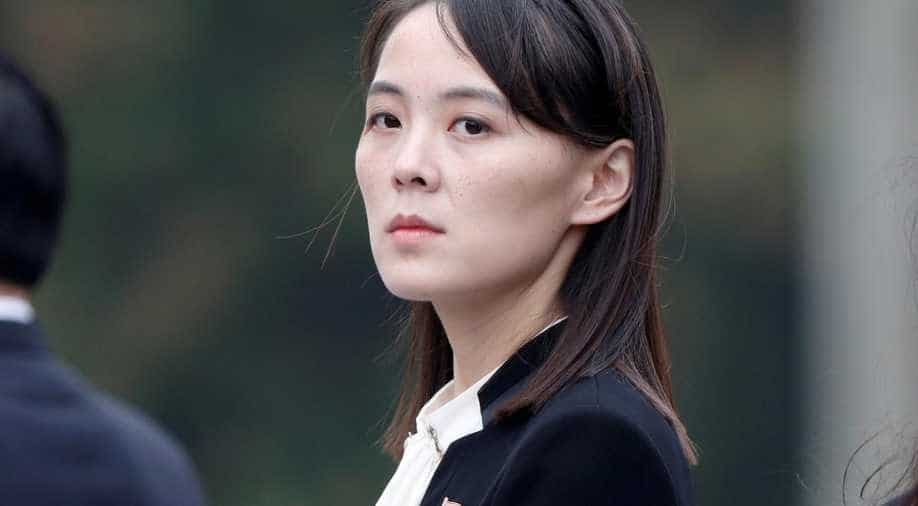 Kim Yo Jong, a senior official in the ruling party and sister of leader Kim Jong Un, released a statement in state media on Tuesday saying the United States appears to be interpreting signals from Pyongyang in a way that would lead to disappointment

A senior North Korean official ridiculed American hopes for talks on Tuesday, as the United States and South Korea agreed to consider scrapping a controversial working group established to coordinate their policy toward Pyongyang.

Kim Yo Jong, a senior official in the ruling party and sister of leader Kim Jong Un, released a statement in state media on Tuesday saying the United States appears to be interpreting signals from Pyongyang in a way that would lead to disappointment.

She was responding to US National Security adviser Jake Sullivan, who on Sunday said, he saw as an 'interesting signal' in a recent speech by Kim Jong Un on preparing for both confrontation and diplomacy with the United States.

"It seems that the US may interpret the situation in such a way as to seek a comfort for itself," she said in a statement carried by KCNA. "The expectation, which they chose to harbour the wrong way, would plunge them into a greater disappointment."

Kim's statement came during a visit to Seoul by recently appointed US special representative for North Korea Sung Kim, who was scheduled to meet with South Korean President Moon Jae-in and Unification Minister Lee In-young, who handles relations with the North, on Tuesday.

On Monday, Sung Kim said he was willing to meet with the North Koreans 'anywhere, anytime without preconditions' and that he looks forward to a 'positive response soon'.

During talks between Kim and his South Korean counterpart Noh Kyu-duk, the two agreed to 'look into terminating the working group' while reinforcing coordination at other levels, the South Korean Foreign Ministry said in a statement.

The working group was set up in 2018 to help the two allies coordinate their approaches to issues, such as denuclearisation talks, humanitarian aid, sanctions enforcement and inter-Korean relations amid a flurry of diplomatic engagement with North Korea at the time.

When asked last year about Seoul's proposals, such as reopening individual tourism to its northern neighbour, US ambassador to South Korea at the time, Harry Harris, said that 'in order to avoid a misunderstanding later that could trigger sanctions... it’s better to run this through the working group'.

Though Harris added that it was not the United States’ place to approve South Korean decisions, the remarks caused controversy in Seoul and a former aide to South Korean President Moon Jae-in later told parliament the working group was increasingly seen as an obstacle to inter-Korean relations.

The Moon administration would see ending the working group as a goodwill gesture from new US President Joe Biden, said Ramon Pacheco Pardo, a Korea expert at King's College London.

"From a South Korean perspective, this was basically a mechanism for the US to block inter-Korean projects during the Trump years," he said. "It would be a clever political move for the Biden administration to end the group, since consultation between Washington and Seoul will take place anyway."

COVID-19: China's Xinjiang suspends all passengers trains in an effort to control outbreak