'No syringes, no beds': Paraguay protests build amid impeachment calls 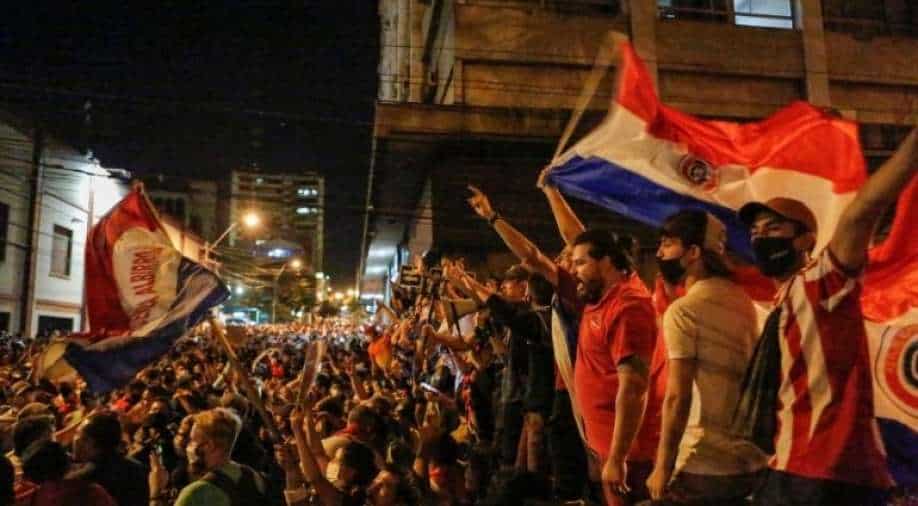 A file photo of a protest against President Mario Abdo Benitez's health policies and the lack of coronavirus disease vaccines in front of the National Congress in Asuncion. Photograph:( Reuters )

The protesters, many wearing soccer jerseys and carrying national flags, chanted "Out Marito" and "Everyone out", while criticizing the authorities for the lack of medicines and intensive care beds amid a spike in coronavirus cases

Thousands of Paraguayans gathered around Congress in downtown Asunción on Monday, marking the fourth day of protests amid calls to impeach President Mario Abdo over the government`s handling of the COVID-19 health crisis.

The protesters, many wearing soccer jerseys and carrying national flags, chanted "Out Marito" and "Everyone out", while criticizing the authorities for the lack of medicines and intensive care beds amid a spike in coronavirus cases.

"In the hospitals there are no syringes, there are no beds," a young man who identified himself as Dudu Dávalos told local television after traveling from the city of Hernandarias, 340 km (210 miles) east of Asunción.

"They had a year to prepare and did nothing."

A protest on Friday had ended in a pitched battle after police used gas and rubber bullets. On Saturday and Sunday, less intense demonstrations shifted to the area near the presidential residence, in an affluent neighborhood of Asunción.

Protesters and some lawmakers have called for Abdo to be impeached, though he still appears to have enough support to see off any challenge. However, he has been forced to shuffle his cabinet "in the interest of pacification".

On Monday he appointed a new Chief of Staff and confirmed doctor Julio Borba as the new health minister.

An impeachment trial could only advance with the support of a group led by former President Horacio Cartes within the ruling Colorado Party. Its lawmakers said they would analyze the changes Abdo promised before making a decision.

Latin America has seen a number of prominent health ministers forced out due to their handling of the pandemic, including in Peru, Argentina and Ecuador.