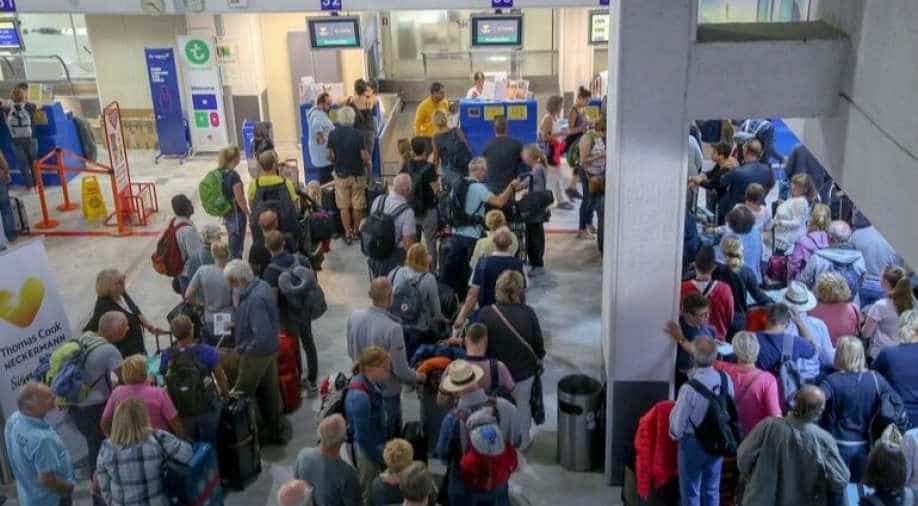 People line up in front of a counter of Thomas Cook at the Heraklion airport on the island of Crete, Greece September 23, 2019. Photograph:( Reuters )

Travellers frantically scoured mobile phones or quizzed officials for information as they waited in long queues in airports around Europe and beyond.

More than half a million holidaymakers were stranded around the globe on Monday following the collapse of Thomas Cook, the world's oldest travel firm.

Travellers frantically scoured mobile phones or quizzed officials for information as they waited in long queues in airports around Europe and beyond.

Here are comments from British tourists caught up in the mayhem at Palma Airport on the Spanish island of Mallorca.

"Nightmare, nightmare, stressed. Not what we wanted really before going home. But what can you do? Other people have lost their jobs, so we're not as bad (off) as some other people."

"Says there's not going to be any flights, we're going to be stuck here in the airport until 7 o'clock (pm) I think. We were meant to fly at 10 o'clock (pm, on Sunday) They're going to fly back to Manchester and then (for us) a coach trip back to Newcastle."

Helen, Trying to get home to Glasgow, Scotland

"They said they directed (those of us bound for) Glasgow to Birmingham, then they're bussing us from Birmingham to Glasgow. So that's as far as we know, but things could change.

"It's quite sad, it is sad you know. Sad for all the staff too, you've got to think."

"I'm very anxious because I have sore legs so I don't know how if I'm going on a plane and then how I'm going to get to Glasgow if they take us to Birmingham or somewhere else. So it's going to be very difficult and a long day and I'm very tired.

Asked if travellers were being given information about what to do: "None, none. We watch it on the news to find out what is happening. So no one has phoned us, no one has emailed us, we've had to find out just when we've arrived."