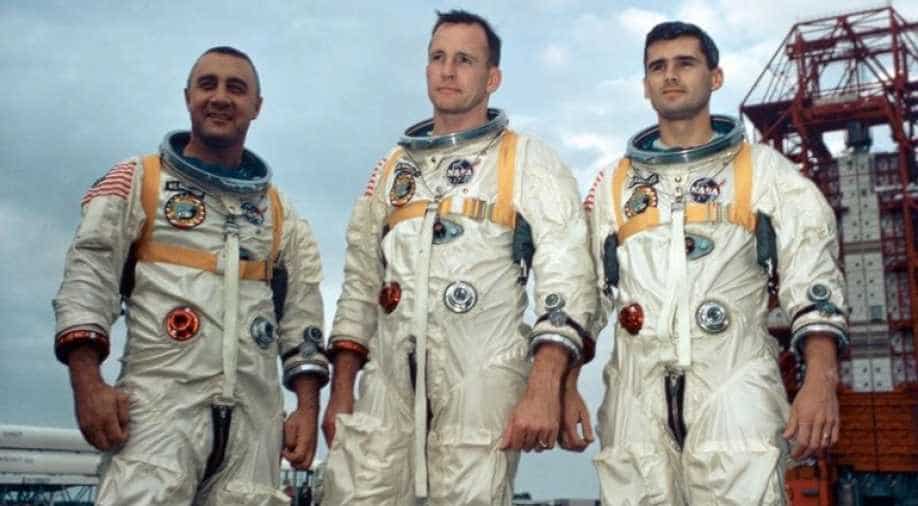 NASA on Friday marked the 50th anniversary of its moon program's fatal Apollo launchpad fire with the first public display of the scorched hatch that trapped three astronauts inside their spaceship during a routine pre-launch test.

NASA astronauts Virgil "Gus" Grissom, Edward White and Roger Chaffee died when thick smoke filled the crew module of the Apollo 1 capsule on January 27, 1967, in what was the first deadly accident in the space agency's early days.

The men were unable to open the capsule's three-part hatch before being overcome by smoke. Emergency rescue teams rushed to battle the fire at the launchpad, located at what is now Cape Canaveral Air Force Station but were too late.

The hatch has now been taken out of storage and incorporated into a new display at the Kennedy Space Center Visitor Complex to honour the fallen astronauts and serve as a reminder of the risks of spaceflight.

"Had that accident occurred in space, we'd have never known exactly what had happened," former Gemini and Apollo astronaut Tom Stafford said at a ceremony to mark the exhibit's opening.

The deaths of these "three great heroes...helped save at least one other in flight, maybe two," he added.

Investigators discovered several problems with the Apollo capsule design that led to the fire, including an electrical wiring issue, a pure-oxygen environment and flammable materials throughout the crew cabin.

NASA made dozens of changes and resumed flying in October 1968, setting the stage for the historic Apollo 11 lunar landing in July 1969.

Grissom, aged 40 and one of the original Mercury 7 astronauts, became the second American in space in a suborbital flight that preceded John Glenn's landmark first US orbital space flight. White, who was 36, became the first American to walk in space as pilot of the Gemini 4 mission in June 1965. Chaffee, 31, was a rookie astronaut with no previous spaceflight experience.

Friday's ceremony was one of the several events this week in which NASA also paid tribute to the Space Shuttle Challenger crew, killed during launch on January 28, 1986, and the Shuttle Columbia astronauts, who died when that spaceship broke apart as it re-entered the Earth's atmosphere on February 1, 2003.

At twilight, the families of the Apollo 1 astronauts gathered at the base of the seaside launch complex where Grissom, White and Chaffee had been testing their capsule when the fire broke out.

“It's really important that we come together and we don’t forget who they were and what they sacrificed. Even more important we remember that we don’t ever want to have it happen again,” Kennedy Space Center director and former shuttle astronaut Bob Cabana told the families.

Cabana said the new exhibit was intended to highlight the importance of a work culture where people feel free to voice concerns. Management and communications problems contributed to both space shuttle accidents, investigators found.

NASA is preparing to turn over crew flights to the International Space Station to privately owned SpaceX and Boeing Co as early as 2018.

“The lessons learned from Apollo 1 are critical to our future success and I don’t ever want them forgotten,” Cabana said. “We got to the moon not in spite of Apollo 1, but because of Apollo 1.”