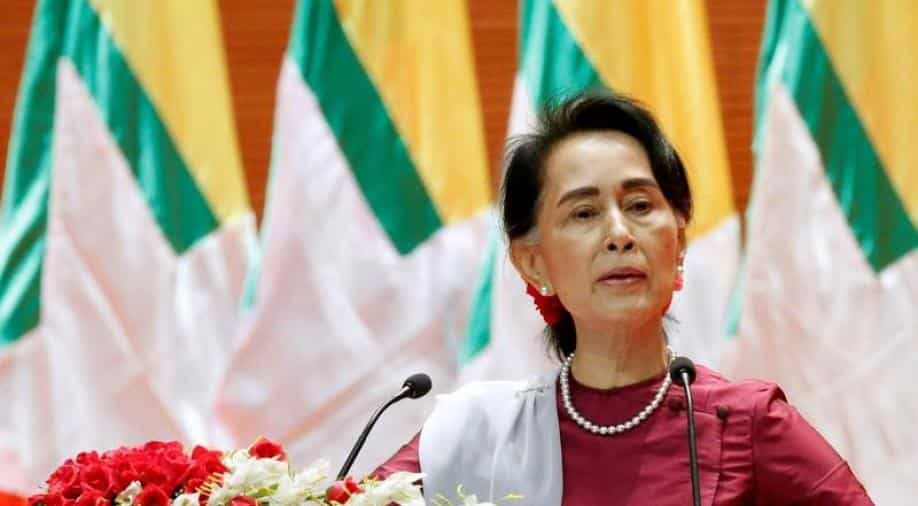 Suu Kyi was accompanied on Thursday by about 20 people travelling in two military helicopters, including state officials and military and police officers.

Myanmar's de facto leader, Aung San Suu Kyi, visited areas hit by conflict in the western state of Rakhine on Thursday for the first time since attacks by militants from the Rohingya Muslim minority two months ago sparked a refugee crisis.

A Reuters reporter saw Suu Kyi board a military helicopter at Sittwe, the Rakhine state capital, at about 9 a.m. on Thursday.

Spokesman Zaw Htay said that she was visiting the troubled border district of Maungdaw, where more than 600,000 members of the stateless Rohingya group have crossed into Bangladesh since Aug. 25.

"She will go to Maungdaw and I cannot give any more details," he said.

Suu Kyi had not previously visited Rakhine state since assuming power last year after a landslide 2015 election victory. The majority of residents in Maungdaw were Muslims until the recent crisis.

Myanmar has been stung by international criticism and accusations of ethnic cleansing, which it rejects, for the way its security forces responded to attacks by Rohingya militants on 30 security posts.

Suu Kyi was accompanied on Thursday by about 20 people travelling in two military helicopters, including state officials and military and police officers.

Businessman Zaw Zaw, formerly sanctioned by the U.S. Treasury, was also with the Nobel Laureate.

Suu Kyi launched an initiative last month to assist rehabilitation and resettlement in Rakhine and has called for tycoons to contribute to the project.

She has pledged that refugees who can prove they were residents of Myanmar will be allowed to return, but thousands of people have continued to arrive in Bangladesh as recently as last night.

Talks with Bangladesh have yet to lead to an agreement on a repatriation process made more complex because the Rohingya have long been denied citizenship in Myanmar.