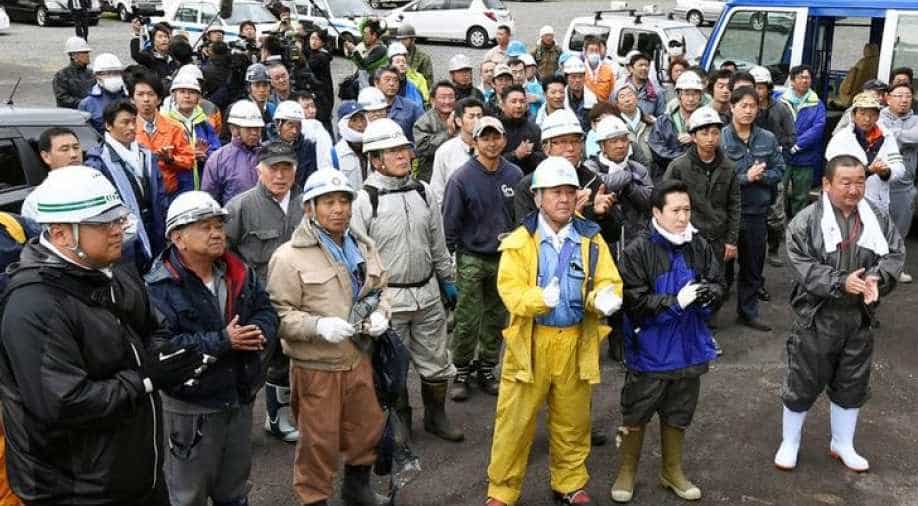 Members of search party for a 7-year-old boy who went missing on May 28, 2016 after being left behind by his parents, celebrate after the boy was found alive, in Nanae town on the northernmost Japanese main island of Hokkaido, Japan, in this photo in this photo taken by Kyodo on June 3, 2016. Photograph:( Reuters )

Follow Us
A Japanese boy abandoned in a dense forest by his parents to discipline him was found alive and unharmed today, nearly a week after his disappearance set off a massive search that kept Japan riveted.

Seven-year-old Yamato Tanooka was discovered in a building on a Japanese military base around 4 km (2.5 miles) from where he disappeared last Saturday after his parents left him by the side of a road, reportedly to discipline him for throwing stones at cars.

"One of our soldiers was preparing for drills this morning and opened the door of a building on the base, and there he was," a member of Japan's Self-Defence Forces told Nippon Hoso Kyokai(NHK).
"When he asked 'are you Yamato?' the boy said yes. Then he said he was hungry, so the soldier gave him some water, bread and riceballs."

Yamato was taken to  hospital for check up and was healthy except for low body temperature and would be kept overnight as a precaution, a doctor told a news conference.

A tearful Takayuki Tanooka, the boy's father, thanked rescuers for their efforts and apologised for causing trouble.

"We've reflected on what we did and it was really excessive," Tanooka said.
"We - well, we loved him before, but I hope to give him even more attention now," he said.

Yamato's parents first said he disappeared while they foraged for edible plants, but later told police they had left him by the road to discipline him after he threw stones at people and cars.

They said when they drove back a few minutes later the boy had disappeared. The area is so remote that residents of the region say they rarely go through it.

The boy somehow managed to survive for nearly a week in the densely forested area, where night temperatures fell as low as 7 degrees Celsius (45 Fahrenheit) and heavy rain had fallen, despite wearing only a t-shirt and jeans.

Yamato said he had "walked through the mountains" until he found the building, which was unlocked. He drank water from a nearby faucet and slept on mattresses spread on the floor.

The search for Yamato gripped Japan. At its peak, it involved several hundred shouting rescuers beating through heavy bush, as well as soldiers on motorbikes and police on horseback.

News programmes gave regular updates throughout the week, and NHK sent a news flash when he was found.

The incident set off a flood of social media comments, with most of those criticising the parents for their carelessness. Today, most expressed relief.

"To be honest, I was certain of a sad result. As the parent of a 7-year-old myself, all I can say is that I am really, really happy," one comment said.