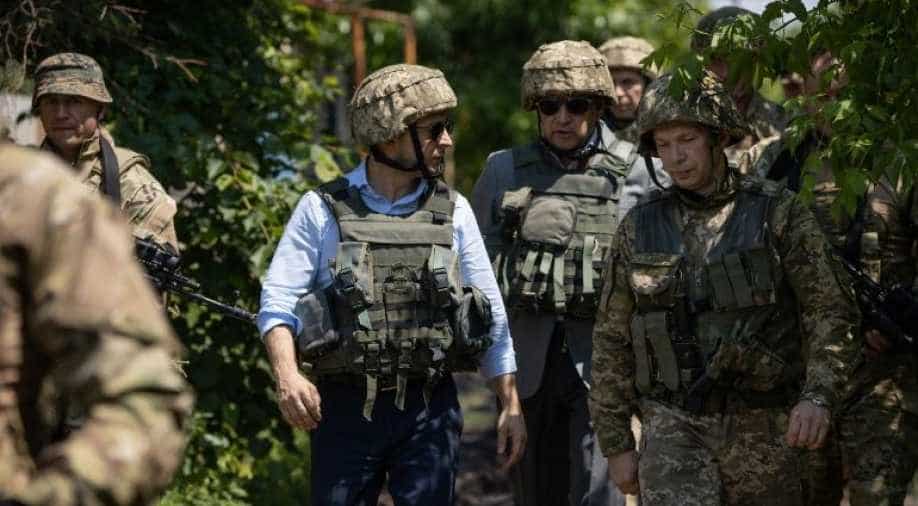 Ukrainian President Volodymyr Zelensky talking with an officer during his visit on the front line with Russia-back separatists in the eastern Lugansk region. Photograph:( AFP )

Kiev has repeatedly blamed Moscow for inciting the conflict.

Ukrainian President Volodymyr Zelensky believes that a meeting with his Russian counterpart Vladimir Putin would help to put an end to the seven-year conflict in the country`s eastern Donbas region.

At a press conference to mark his two years in office, Zelensky on Thursday expressed his expectation of a meeting with Putin, reports Xinhua news agency.

"I believe that in addition to the Normandy format (Ukraine, Russia, France and Germany), there will be a direct conversation with the President of the Russian Federation.

"I also see a format for involving the US in this discussion," said Zelensky, noting that Ukraine has no other chance but to stop the war now.

The President stressed that ending hostilities and a de-occupation of Ukrainian territories remain priorities for him and that the situation in Donbas, which comprises the regions of Donetsk and Luhansk, may become the subject of an all-Ukrainian referendum.

Parts of Donetsk and Luhansk regions along the Russian border have been controlled by rebels supported by Moscow for nearly seven years.

According to UN estimates, more than 13,000 people have been killed in fighting since 2014, while as many as 40,000 others have been wounded.

Despite the imposition of the latest ceasefire in 2015, around 50 people have been killed since the beginning of this year alone.

Kiev has repeatedly blamed Moscow for inciting the conflict.

Russia, however, has denied the charges, saying the accusations are groundless.