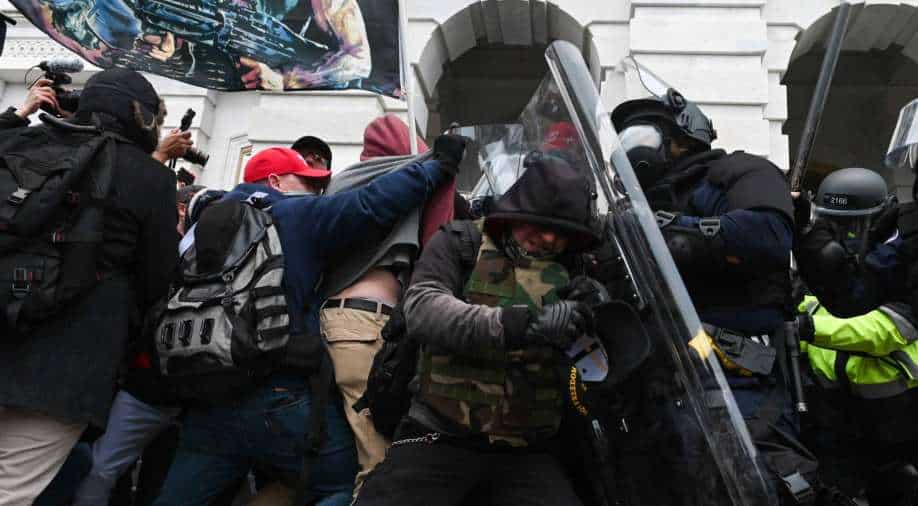 Mark Meadows, the former chief of staff for President Donald Trump, filed suit Wednesday against House Speaker Nancy Pelosi and the House committee investigating the Jan. 6 attack on the Capitol in an attempt to persuade a federal judge to block the committee’s subpoenas.

Meadows’ suit came hours after the committee said it would move forward with a criminal contempt of Congress referral against Meadows after he refused to appear for a scheduled deposition.

His lawsuit, filed in federal court in Washington, accuses the committee of issuing “two overly broad and unduly burdensome subpoenas” against him, including one sent to Verizon for his phone and text data.

“Mr. Meadows faces the harm of both being illegally coerced into violating the Constitution,” his lawsuit contends. It asks a judge to declare the subpoenas “unlawful and unenforceable,” and claims the inquiries violate his constitutional rights to free speech and privacy.

The committee did not immediately announce a date for its vote on the contempt referral against Meadows, which is all but certain to be approved and sent to the full House, where lawmakers are likely to pass it, formally recommending that the Justice Department prosecute Meadows. It would be the third time the committee has moved to hold a recalcitrant witness in criminal contempt.

“The select committee is left with no choice but to advance contempt proceedings and recommend that the body in which Mr. Meadows once served refer him for criminal prosecution,” Rep. Bennie Thompson, D-Miss., chair of the committee, wrote to Meadows’ lawyer, George Terwilliger.

In a statement Wednesday night, Thompson and Rep. Liz Cheney, R-Wyo., the committee’s vice chair, said that Meadows’ “flawed lawsuit won’t succeed at slowing down the select committee’s investigation or stopping us from getting the information we’re seeking.”

The committee has now interviewed more than 275 witnesses and obtained tens of thousands of documents. Those cooperating include some members of former Vice President Mike Pence’s inner circle, including Marc Short, his former chief of staff. But several high-profile witnesses are stonewalling the panel, in line with a directive from Trump.

Meadows joins Trump in suing the committee to try to block its investigation. The former president is battling in court to prevent the release of documents requested by the committee that he says are subject to executive privilege, although the Biden administration has refused to assert that claim.

Meadows, who has turned over thousands of pages of documents to the committee, informed the panel Tuesday that he was no longer willing to sit for a deposition that had been scheduled for Wednesday, reversing a deal he had reached with the panel just last week to be interviewed by its investigators. The leaders of the committee immediately threatened to charge Meadows, a former congressman from North Carolina, with contempt of Congress if he did not appear.

Thompson said Meadows had provided some useful information to the committee, including a November email that discussed appointing an alternate slate of electors to keep Trump in power and a Jan. 5 message about putting the National Guard on standby.

Meadows also turned over to the committee his text messages with a member of Congress in which the lawmaker acknowledged that a plan to object to President Joe Biden’s victory would be “highly controversial,” to which Meadows responded, “I love it.” And he furnished text exchanges about the need for Trump to issue a public statement Jan. 6 aimed at persuading the mob marauding through the Capitol in his name to stand down.

But Meadows also informed the committee that he had turned in the cellphone he used on Jan. 6 to his service provider and that he was withholding some 1,000 text messages connected with the device, Thompson said, prompting additional questions and the need for more cooperation and a deposition.

“There is no legitimate legal basis for Mr. Meadows to refuse to cooperate with the select committee and answer questions about the documents he produced, the personal devices and accounts he used, the events he wrote about in his newly released book and, among other things, his other public statements,” Thompson wrote.

The committee recently sent a flurry of subpoenas to telecommunications companies seeking the data of dozens of individuals, including Meadows, prompting his lawyer to object to a request he said sought “intensely personal communications” with no relevance to any legitimate investigation.

“The Verizon subpoena seeks Mr. Meadows’ cellphone metadata, despite the fact that he has already provided the select committee with his responsive text messages, emails, and the metadata,” his lawsuit states.

The subpoenas, which follow records preservation demands sent to 35 technology and social media companies in August, do not seek the content of any communications but simply the dates and times of when the calls and messages took place, according to a committee aide.

The House voted in October to recommend that another of Trump’s associates, Steve Bannon, be charged with criminal contempt of Congress for refusing to cooperate with the investigation. A federal grand jury subsequently indicted him on two counts that could carry a total of up to two years behind bars. A judge on Tuesday set a July 18 trial date for Bannon, meaning that the select committee will most likely have to wait the better part of a year, if not longer, for a resolution of his case and any potential cooperation from him.

The committee has also recommended a contempt charge against Jeffrey Clark, a former Justice Department lawyer who participated in Trump’s efforts to invalidate the 2020 election results, for refusing to cooperate with its inquiry. The panel is waiting to complete that referral until it can determine how much information Clark is willing to provide during a deposition scheduled for Dec. 16. Clark has said he will invoke his Fifth Amendment right against self-incrimination.

Another potential witness, John Eastman, a lawyer who wrote a memo that some in both parties have likened to a blueprint for a coup to keep Trump in power, has also indicated that he plans to invoke the Fifth Amendment in response to the committee’s subpoena.

A third witness, political operative Roger Stone, told the committee this week that he, too, planned to invoke his right against self-incrimination in defying a subpoena, declining to sit for an interview or produce documents.

“Given that the select committee’s demand for documents is overbroad, overreaching and far too wide-ranging to be deemed anything other than a fishing expedition, Mr. Stone has a constitutional right to decline to respond,” his lawyer, Grant J. Smith, wrote to the panel.