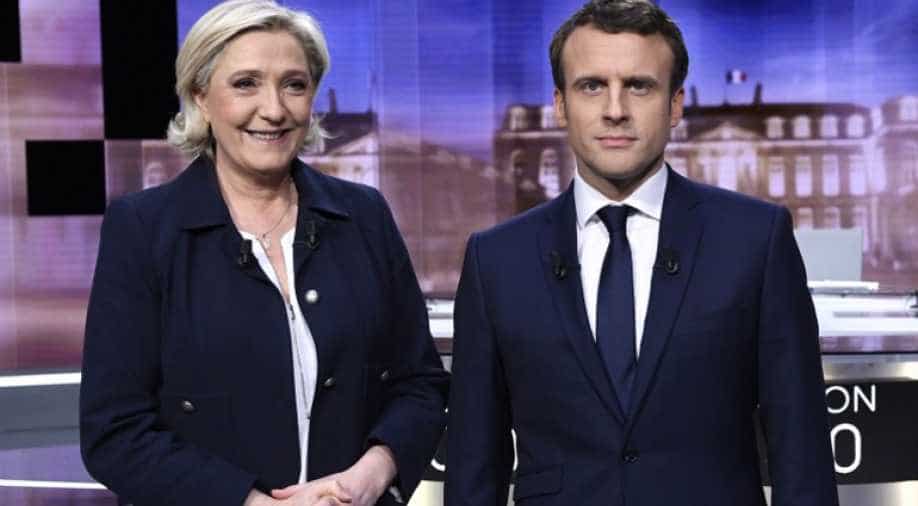 Despite Macron's lack of political experience, polls currently suggest he should beat Le Pen by around 20 percentage points. Photograph:( AFP )

The two candidates vying to win France's presidency in the decisive run-off vote on Sunday could scarcely have more different visions of the nation and its place in the world.

His far-right rival Marine Le Pen, the scion of the family who founded the anti-immigration National Front (FN) party, champions France-first nationalism and proposes withdrawing from the eurozone.

"I am the candidate of the people of France such as we love it, of the nation that protects jobs, security, our borders," 48-year-old Le Pen said in a brutal face-to-face TV debate that encapsulated the candidates' differences.

Macron had a starkly different message: "France is not a closed country. I am for a strong France, in an EU that offers it protection," he said.

His rise has been meteoric. He had never before stood for election but is now on the cusp of becoming France's youngest-ever president.

Despite his lack of political experience, polls currently suggest he should beat Le Pen by around 20 percentage points.

President Francois Hollande launched Macron's political career, picking the Rothschild banker as an economic advisor and then parachuting him into his Socialist government as economy minister.

Sensing a worldwide shift away from established parties, Macron quit the cabinet last August to concentrate on building his own centrist political movement "En Marche" (On the Move).

He has since attracted over 250,000 members and confounded early critics who said his appeal did not stretch beyond young, urban professionals.

Macron has also flouted convention in his personal life.

From a middle-class family in Amiens, northeast France, he fell for his drama teacher, Brigitte Trogneux, while he was at secondary school.

A 64-year-old mother-of-three, a quarter of a century older than Macron, she left her husband and married him in 2007.

The unshakeable confidence with which Macron pursued his future wife has been evident throughout his career.

But it nearly tripped him up after he finished first in the first round of the election when he gave what many saw as an overly triumphant speech and then threw a party at a Paris bistro.

Opponents and allies alike were quick to remind him that victory over Le Pen was not assured, and he threw himself into campaigning.

A potentially crucial moment came on April 26, when he was at risk of being upstaged by Le Pen at an under-threat Whirlpool dryer factory in Amiens.

After she made a lightning visit, he was forced to go too, plunging into a scrum of workers who initially booed him before he engaged with them for more than an hour.

In an 11th-hour twist to a campaign marked by drama, Macron's team said it was hit by a "massive" hacking attack after a flood of thousands of internal documents were released online late Friday.

Unlike Macron, Le Pen had a front-row seat on the world of hard-edged politics from an early age.

Her pugnacious father Jean-Marie Le Pen reached the run-off of the 2002 presidential election but was soundly beaten by the centre-right Jacques Chirac.

Fifteen years later, his gravel-voiced daughter believes she can become France's first woman president and the first from the party that her father founded.

She has campaigned on the same nationalist and protectionist themes that carried Donald Trump to the White House and drove Britain's vote to leave the EU.

But in a bruising TV debate between the two rounds, her strategy of all-out attack on Macron appeared to backfire, as polls suggested viewers found him more convincing.

She goes into the run-off with several investigations hanging over the FN and her entourage for alleged funding scandals.

Le Pen has performed better than during the last presidential election in 2012 when she finished third with just under 18 percent. This time she scored more than 21 percent in the first round.

She has worked assiduously to try to rid the FN of its more extreme edge and make it a "party of patriots" -- and she kicked her father out after he repeatedly described Nazi gas chambers as a "detail of history".

Now a twice-divorced mother of three, she guards her private life carefully.

She appears rarely as a couple with her current partner, the FN's vice-president Louis Aliot.

Despite that experience, she blames migration -- and the European Union -- for France's economic woes.