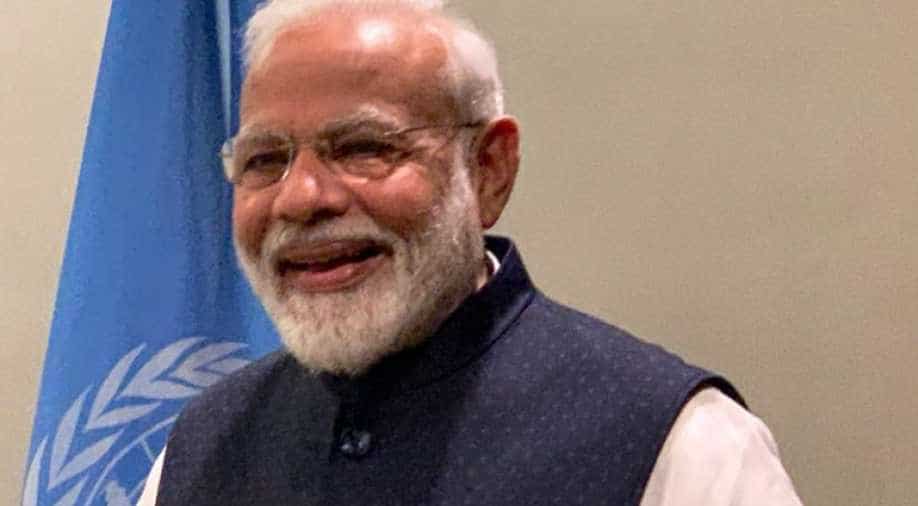 The Indian prime minister who has had a busy week since he kicked off his US tour with the 'Howdy, Modi' event in Houston which was also attended by US President Donald Trump.

The Indian prime minister had addressed the UN climate change summit followed by the global business forum which was attended by several CEOs worldwide. The prime minister met several heads of state during his UNGA session chief among them being US President Trump and Iran's President Rouhani.

Starting his speech by mentioning the Father of the Nation Mahatma Gandhi, Prime Minister Narendra Modi's speech at UNGA outlined the steps being undertaken in India to combat climate change, including the sweeping ban on single-use plastic which is set to go come to force on Gandhi Jayanti this year.

"This year the whole world is celebrating the 150th birth anniversary of Mahatma Gandhi. His message of truth and non-violence is very relevant for us even today for peace, progress, and development of the world," Modi told the gathering in his maiden speech to the UNGA after assuming power for the second term.

"While I was coming here, I read on the walls of the United Nations 'No more single-use plastic'. I am delighted to inform you that we are running a big campaign in India to free the country of single-use plastic."

While India's contribution to global warming is low, India is one of the leading countries in the fight against climate change, he said, highlighting how India has initiated the International Solar Alliance.

He also invited countries to join the Coalition for Disaster Resilient Infrastructure, which was launched by India during his address at the UN Climate Action Summit which was held on Monday.

The Prime Minister also highlighted how India plans to increase its renewable energy capacity to 450 GW in the coming years, a point which was already highlighted by the leader during his Monday's address.

"We believe that terrorism is not a challenge for any one country, but for all countries and of mankind as a whole. So for the sake of humanity, all the world has to unite against terror," PM Modi said.

"When a developing nation successfully carries out the biggest cleanliness drive of the world and provides more than 11 crore toilets to its people just within 5 years, that system gives a message of inspiration to the entire world," he said.

"Let's not be limited within our borders," PM Modi said.

India to be tuberculosis free by 2025, the Indian prime minister told the UNGA.

'800 varieties of vital medicines have been made avaliable'.

India is running a campaign against the use of single-use plastic.

11 crore toilets have been launched since 2014.

The country has launched the biggest biometeric programme in the world to stamp out corruption.

I am honoured to address the UN General Assembly. Recently we had the biggest elections ever.

The Indian prime minister had opened a solar park atop the UN building on Wednesday.