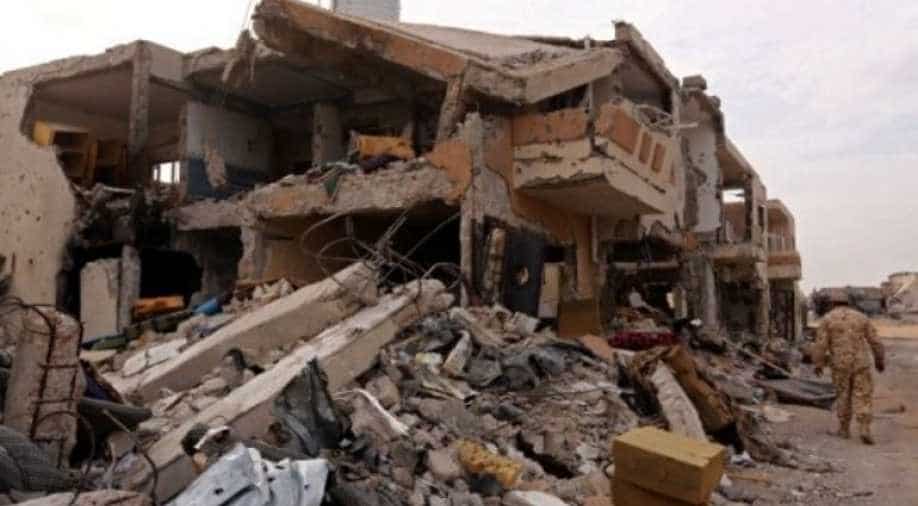 A member of the Libyan forces of the National Accord (GNA) patrols Sirte's Al-Giza Al-Bahriya district on December 20, 2016 after they drove the Islamic State (IS) group out of its Libyan stronghold earlier this month. Photograph:( AFP )

Sirte lies in the centre of Libya’s Mediterranean coast which is at equal distance from Libya’s GNA-based capital, Tripoli and General Haftar's capital, Tobruk.

The spokesperson for LNA, Ahmed al-Mesmari, said that “The commander-in-chief decided a well-planned pre-emptive strike operation that took less than three hours” and his fighters “were in the heart of Sirte”.

Adding further, he said “The operation to liberate Sirte was quick and swift. The battle was based on secrecy and surprise.”

Sirte lies in the centre of Libya’s Mediterranean coast which is at equal distance from Libya’s GNA-based capital, Tripoli and General Haftar's capital, Tobruk.

Sirte was controlled by GNA-aligned forces since they expelled Islamic State (IS) militants with the help of US airstrikes in 2016.

General Haftar launched military operation over Tripoli, since April. Sirte is seen as an important gain to General Haftar.

Haftar led LNA further said that they had taken the surrounding districts which also includes, al-Qardabiya airbase before reaching the centre of the city.

According to a resident in the area, the fighters of LNA were entering inside Sirte city and "they control large parts of the city now". Many claimed that they heard gunfire shots.

However, there was no immediate response from GNA forces and they claimed it to be nothing more than ‘rumours’. In their statement, the clashes took place on the outskirts of the city and Sirte is far from any danger.

Turkey is on its way to support GNA by sending its military advisers and experts to Libya to reduce the international conflict.

According to UN experts and diplomats, LNA has received material and military support from countries including the United Arab Emirates, Jordan, and Egypt.

This move was slammed by the UN’s special envoy to Libya, Ghassan Salame and he asks foreign entities to stay out from Libya and its matters.

A military college was hit in the capital on Saturday that killed at least 30 people, a day after the only functioning airport was closed in Tripoli. Such escalations of fighting, shelling, and airstrikes were witnessed in the capital city in recent weeks.

Sirte was actually the hometown of former Libyan dictator Muammar Gaddafi. It had been taken by ISIS in early 2015 and was one of the jihadi group’s most prominent base outside the Middle East. Haftar’s forces had already captured the oil ports of the coastal city in 2016.

(With Inputs from Agencies)