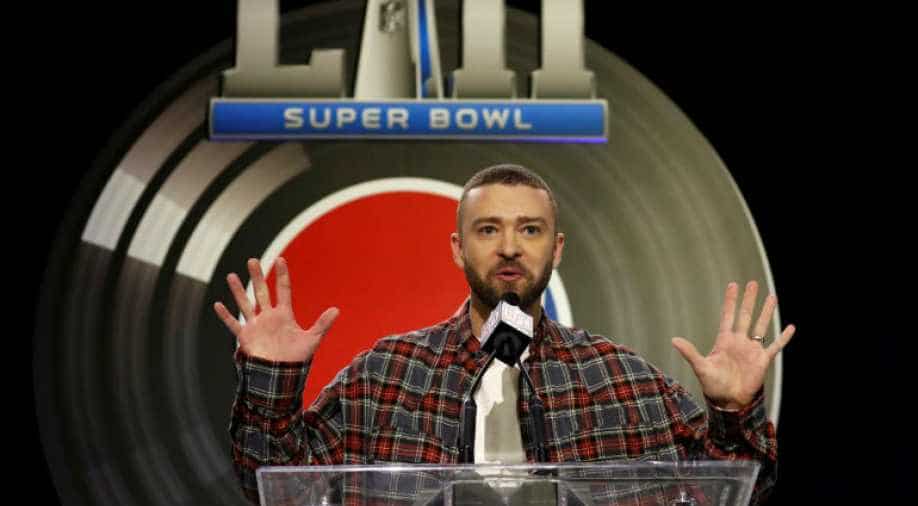 Timberlake on Sunday will return to America`s biggest stage 14 years after a "wardrobe malfunction" overshadowed his last gig. Photograph:( Reuters )

Justin Timberlake caused a national controversy when he performed the Super Bowl halftime show with Janet Jackson in 2004, and the pop singer said on Thursday not to expect his partner in crime to appear this time around.

Timberlake on Sunday will return to America`s biggest stage 14 years after a "wardrobe malfunction" overshadowed his last gig at the National Football League`s championship game.

"To be honest I had a ton of grand ideas about special guests. There`s a whole list. I think Vegas has a lot of odds on it. From NSYNC to (Jay-Z) to Chris Stapleton to Janet," Timberlake told a news conference in Minneapolis.

"But this year... my band, the Tennessee Kids, I feel like they are my special guests and I am excited this year to rock the stage and it`s going to be a lot of fun."

Timberlake infamously ripped off part of Jackson`s garment during their halftime show performance in Houston and briefly bared her breast. The incident coined the phrase "wardrobe malfunction."

Timberlake infamously ripped off part of Jackson`s garment during their halftime show performance in Houston and briefly bared her breast. The incident coined the phrase "wardrobe malfunction." (Others)

The Parents Television Council published an open letter to Timberlake on Thursday asking the 10-times Grammy winner to keep his performance, which is estimated to draw more than 100 million viewers, friendly and safe for children.

"The fallout of your performance during Super Bowl XXXVIII has left an indelible mark. You really threw us – and millions of parents who were watching with their kids," the group wrote.

"The now-infamous wardrobe malfunction was the biggest news story for weeks, even at a time when the nation had launched into war in Iraq."

The letter continued, "We ask you to keep the halftime show friendly and safe for the children watching, and who may be hoping to emulate you one day."

Timberlake did not reveal too many details of his upcoming performance but did say his "Can`t Stop The Feeling" hit song from the movie "Trolls" will be included along with plenty of dancing, while also promising something new.

"Without giving too much away we are doing a few things with this halftime show that they have never quite done before," said Timberlake, whose new album "Man of the Woods" come out on Friday.

"I always like to push, to be able to do something like that. But also, on a more serious note, it`s a moment where you have the opportunity to bring so many people together through what I think is the greatest art form, which is music."

Timberlake will have around 13 minutes to perform at halftime of the game between the New England Patriots and Philadelphia Eagles in Minneapolis.

Timberlake, who turned 37 on Wednesday and was serenaded to "Happy Birthday" by some of the attending media, took many light-hearted questions but also stressed how grateful he was to be able to share his passion for writing and performing music.

"We want everyone to have a ton of fun, that`s my main objective with the halftime show," said Timberlake. "I like to make dance music so I hope everyone`s dancing. I think that`s the greatest thing anyone can do to express joy."