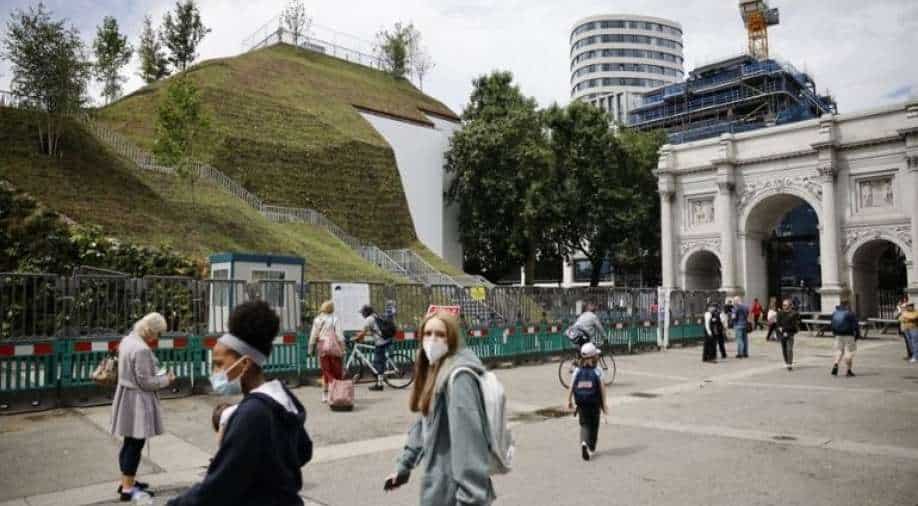 Pedestrians walk past the Marble Arch Mound, a new temporary attraction, next to Marble Arch in central London Photograph:( AFP )

Located beside one of the city’s busiest intersections, the mound had been designed by Dutch architecture firm MVRDV

The temporary, 25-metre-high artificial hill worth $8.15 million, is a viewing platform on the summit and an events space inside.

Located beside one of the city’s busiest intersections, the mound had been designed by Dutch architecture firm MVRDV.

While hill’s website describes it as “a new and meaningful experience that captures the imagination of residents, businesses and visitors,” tourists likened it to a molehill and said it resembled a construction site or a slag heap that bears little resemblance to the lush images on the website.

Although it was envisaged as a draw for tourists who have typically stayed away from central London during the pandemic but shortly after opening, the local Westminster Council admitted it is "not yet ready for visitors".

It said anyone who has booked to visit this week would be offered a refund and a free ticket for another visit “once it has had time to bed in and grow.”

“The mound is a living building by design,” the council said in a statement.

“We’ll continue to adapt and improve London’s newest outdoor attraction and resolve any teething problems as they emerge.”