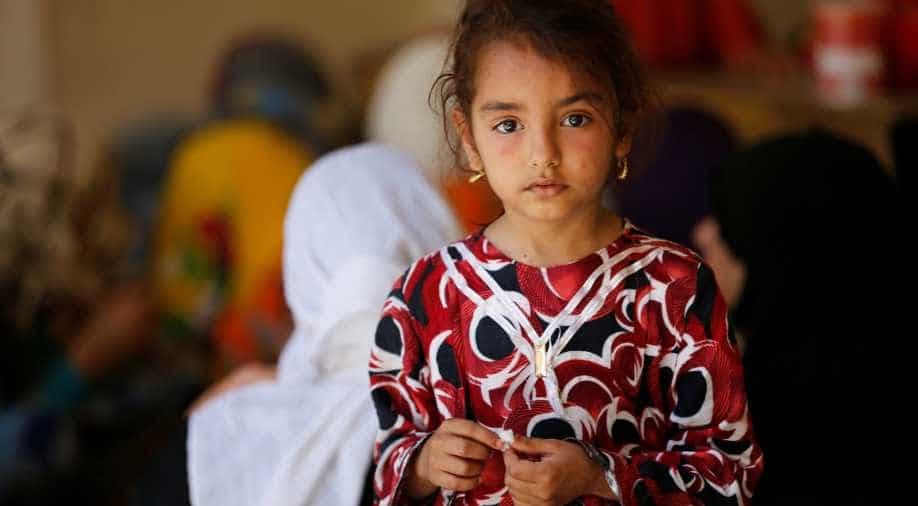 An Iraq girl who has fled home due to the clashes on the outskirts of Falluja, gather in the town of Garma, Iraq, May 30, 2016. REUTERS/Thaier Al-Sudani
Follow Us

Islamic State militants fought back vigorously overnight and parried an onslaught by the Iraqi army on a southern district of the city of Falluja, the group's bastion near Baghdad, officers said on Tuesday.

An aid official warned of a "human catastrophe" unfolding in the city, with residents unable to escape.

Soldiers from the elite Rapid Response Team stopped their advance overnight about 500 meters (yards) from the al-Shuhada district, the southeastern part of city's main built-up area, an army commander and a police officer said.

``Our forces came under heavy fire, they are well dug in in trenches and tunnels,'' said the commander speaking in Camp Tariq, the rear army base south of Falluja, 50 km (30 miles) west of Baghdad.

A staff member of Falluja's main hospital said they received reports of 32 civilians killed on Monday. Medical sources had reported that the death toll in the city stood at about 50, 30 civilians and 20 militants, during the first week the offensive which started on May 23.

Falluja has been under siege for more than six months. Foreign aid organization are not present in the city, but are providing help to those who manage to exit and reach refugee camps.

The latest offensive is causing alarm among these organizations as more than 50,000 civilians remain trapped with limited access to water, food and health care.

“A human catastrophe is unfolding in Fallujah. Families are caught in the crossfire with no safe way out,” said Jan Egeland, Secretary General of the Norwegian Refugee Council, one of the organizations helping families displaced form the city.

“For nine days we have heard of only one single family managing to escape from inside the town,'' he said in a statement on Tuesday. `Warring parties must guarantee civilians safe exit now, before it’s too late and more lives are lost.”

Falluja is the second-largest Iraqi city still under control of the militants, after Mosul, their de facto capital in the north that had a pre-war population of about 2 million.

Prime Minister Haider al-Abadi announced the assault on Falluja on May 22 after a spate of bombings that killed more than 150 people in one week in Baghdad, the worst death toll so far this year. A series of bombings claimed by Islamic State also hit Baghdad on Monday, killing over 20 people.

Falluja has been a bastion of the Sunni insurgency that fought both the U.S. occupation of Iraq and the Shi'ite-led Baghdad government that took over after the fall of dictator Saddam Hussein, a Sunni, in 2003.

It was the first city to fall under Islamic State control, in January 2014.

It would be the third major city in Iraq recaptured by the government after Saddam's home town Tikrit and Ramadi, the capital of Iraq's vast western Anbar province.

Falluja is also in Anbar, located between Ramadi and Baghdad. Capturing it would give the government control of the major population centres of the Euphrates River valley west of the capital for the first time in more than two years.