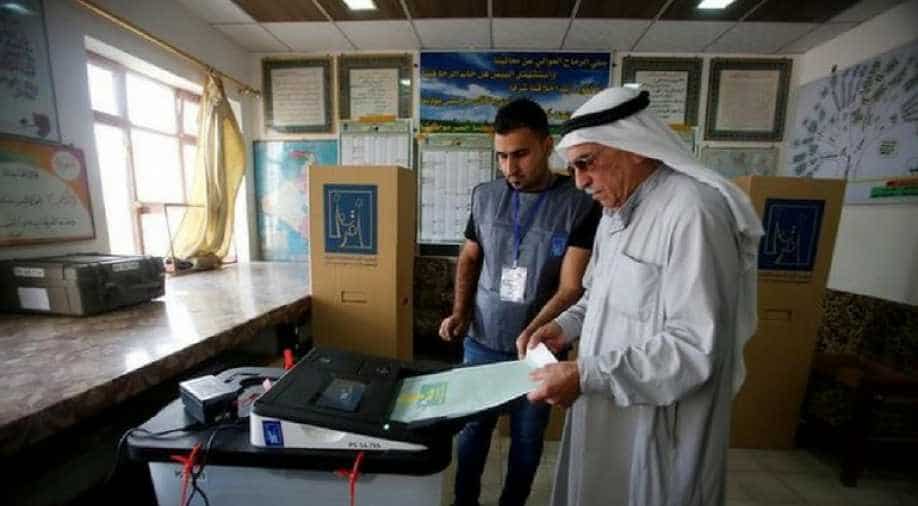 An Iraqi man casts his vote at a polling station during the parliamentary election Photograph:(Reuters)
Follow Us

Iraqis voted on Saturday in the first election since the defeat of Islamic State militants inside the country.

Final results are expected on Monday.

Turnout was 44.52 percent with 92 percent of votes counted, the Independent High Electoral Commission said -- significantly lower than in previous elections.

Results are due to be officially announced on Monday.

Abadi, a rare ally of both the United States and Iran, was mainly concerned with fending off Shi'ite Muslim groups other than Sadr's alliance, which are seeking to pull the country closer to Tehran.

Those rivals were his predecessor as prime minister, Nuri al-Maliki, and the leader of the main Shi'ite paramilitary group, Hadi al-Amiri, both closer than he is to Iran, which has wide sway in Iraq as the primary Shi'ite power in the region.

Unofficial results compiled by reporters in southern provinces also indicated that Sadr, a firebrand cleric who led a violent uprising against US troops from 2003-2011, appeared to be making a strong showing.

If the Sadr list finished second, that would mark a surprise comeback by the cleric.

Sadr has a zealous following among the young, poor and dispossessed but has been sidelined by influential Iranian-backed figures such as Amiri.

Sadr has kept Tehran at a distance.

Sadr has formed an unlikely alliance with communists and other independent secular supporters who joined protests he organised in 2016 to press the government to see through a move to stem endemic corruption.

He derives much of his authority from his family. Sadr's father, highly respected Grand Ayatollah Mohammed Sadeq al-Sadr, was murdered in 1999 for defying Saddam Hussein.

His father’s cousin, Mohammed Baqir, was killed by Saddam in 1980.

Whoever wins the election will have to contend with the fallout from US President Donald Trump's decision to quit Iran's nuclear deal, a move Iraqis fear could turn their country into a theatre of conflict between Washington and Tehran.

Abadi, who came to power four years ago after Islamic State seized a third of Iraqi territory, received US military support for Iraq's army to defeat the Sunni Muslim militant group even as he gave free rein to Iran to back Shi'ite militias fighting on the same side.

If parliament chooses him as prime minister, Abadi will remain under pressure to maintain that balancing act amid tensions between Washington and Tehran over the nuclear accord.

Abadi, a British-educated engineer, was seen by some Iraqis as lacking charisma and ineffective.

He had no powerful political machine of his own when he took office.

But the defeat of Islamic State and Abadi's campaign to eradicate Iraq's rampant corruption improved his standing.

Even if Abadi's Victory Alliance wins the most seats, he still must negotiate a coalition government, which must be formed within 90 days of the election.

Amiri's Badr organisation played a key role in the battle against Islamic State. But some Iraqis resent his close ties to Tehran.

His list is expected to come in third place, according to the election commission source and security official.

Earthquake in Turkey, Syria: A timeline of the world's destructive earthquakes since 2000