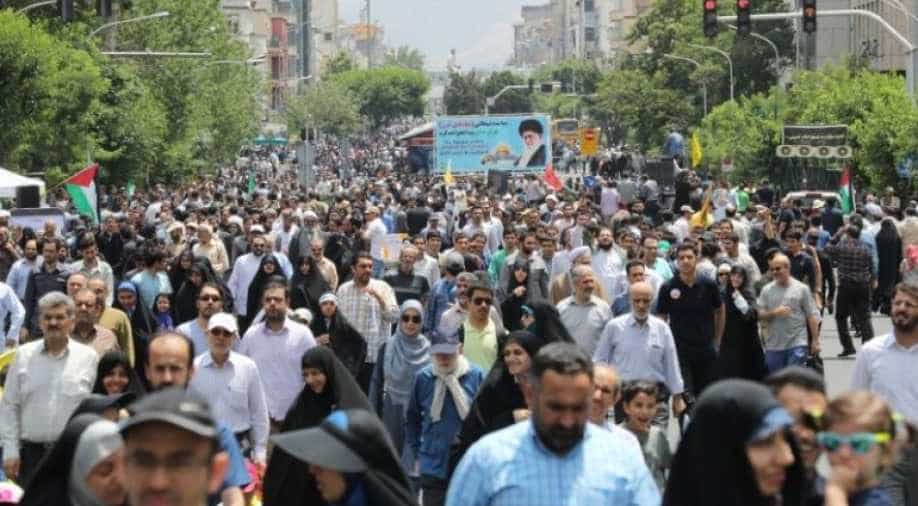 Iranians take part in a protest marking the annual al-Quds Day (Jerusalem Day) on the last Friday of the holy month of Ramadan in Tehran, Iran May 31, 2019. Photograph:( Reuters )

State television said state-sponsored marches were being held in 950 communities across Iran and showed demonstrators carrying banners with slogans such as 'Jerusalem is the eternal capital of Palestine' and 'Death to America'.

Tens of thousands of Iranians marking the annual "Quds (Jerusalem) Day" in the Islamic Republic on Friday condemned a planned Middle East peace plan touted by US President Donald Trump as the "deal of the century."

State television said state-sponsored marches were being held in 950 communities across Iran and showed demonstrators carrying banners with slogans such as "Jerusalem is the eternal capital of Palestine" and "Death to America".

"No to the deal of the century" read a banner splashed across the news screen on state TV, which also showed a Quds Day march in neighbouring Iraq`s capital Baghdad.

Iran`s Revolutionary Guards said on Wednesday that Washington’s long-awaited Israeli-Palestinian peace plan was doomed to fail and that the Palestinian resistance movement would respond firmly to those who proposed it.

Palestinian officials have already spurned the plan, believing it will be heavily biased in favour of Israel.

Opposition to Israel is a cornerstone of Shi`ite-led Iran. It backs Palestinian and Lebanese Islamist militant groups opposed to peace with Israel, which Tehran refuses to recognise.

Iran`s Supreme Leader Ayatollah Ali Khamenei has said the Trump plan would fail, and President Hassan Rouhani said on Wednesday that the deal of the century would be the "bankruptcy of the century" for its who proponents.

Israel, the United States and its chief Sunni Arab ally Saudi Arabia accuse Iran of fomenting tension in the Middle East and of sponsoring terrorism. Tehran denies this.

Quds Day was launched by Ayatollah Ruhollah Khomeini, the leader of Iran`s 1979 Islamic revolution, and is held on the last Friday of the Muslim fasting month of Ramadan.