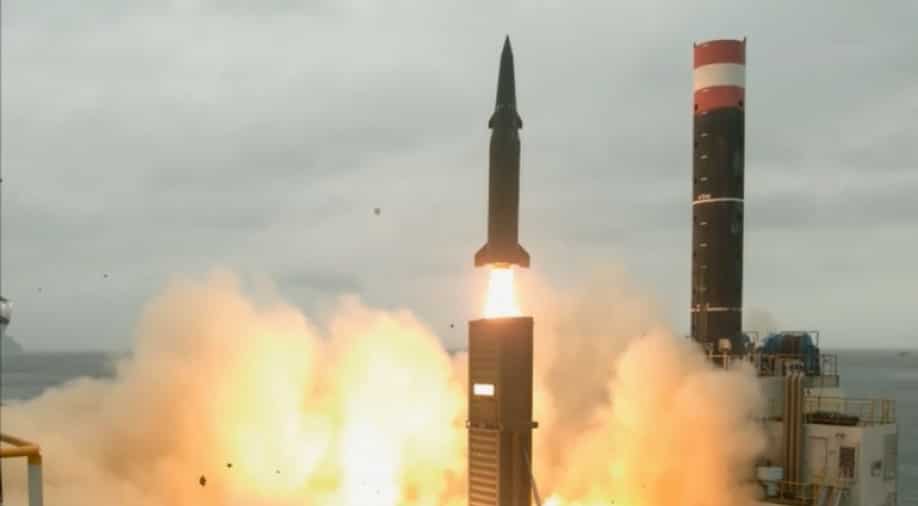 Iran said on Saturday that it had successfully tested a new medium-range missile in defiance of warnings from Washington that it was ready to ditch a landmark nuclear deal over the issue.

State television carried footage of the launch of the Khoramshahr missile, which was first displayed at a high-profile military parade in Tehran on Friday.

It also carried in-flight video from the nose cone.

The broadcaster did not say when the test had been conducted, although officials had said on Friday that it would be tested "soon".

Previous Iranian missile launches have triggered US sanctions and accusations that they violate the spirit of the 2015 nuclear deal between Tehran and major powers.

President Donald Trump has threatened to bin the agreement over the issue, saying that Iran`s missile programme could give it the technical knowhow for a delivery system for a nuclear warhead when a sunset clause in the deal expires in 2025.

He is due to report to Congress on October 15 on whether he believes Iran is in compliance with the nuclear deal and whether it remains in US interests to stick by it.

If he decides that it is not, that could open the way for US lawmakers to reimpose sanctions, leading to the potential collapse of the agreement.

Trump said on Wednesday he had made his decision but was not yet ready to reveal it.

The other signatories to the deal -- Britain, France, Germany, China, Russia and the EU -- have all pushed for the deal to continue.

They say Iran has stuck to its commitments -- as repeatedly stated by the International Atomic Energy Agency.

They say that the nuclear deal was never intended to address other issues.

At Friday's military parade, President Hassan Rouhani vowed that Iran would press ahead with its missile programme regardless of the warnings from Washington.

"We will strengthen not only our missiles but also our air, land and sea forces... When it comes to defending our country, we will ask nobody for their permission," he said.

Iran says all of its missiles are designed to carry conventional warheads only and has limited their range to a maximum of 2,000 kilometres, although commanders say they have the technology to go further.

That makes them only medium-range but still sufficient to reach Israel or US bases in the Gulf.

As well as carrying out missile tests, Iran has also launched a space satellite and fired missiles at Islamic State group targets in eastern Syria in recent months.

Iran has said repeatedly that it has no choice but to boost its defences as its regional rivals Israel and Saudi Arabia sign huge arms contracts with Washington and other Western governments.